Question: Hi Digg. In the 90's my friends and I used to go to a club in Liverpool called Planet X. From memory the club was about the size of a terraced house with the bands playing on the floor in what was essentially someones front room. We saw lots of earache bands there back in the day, Carcass, Entombed (on their first UK tour), Bolt Thrower, Pitchshifter, Cathedral (what I believe was their first gig - in front of about 15 people! Supporting S.O.B) and many other bands. This was a classic venue and I can find nothing on the interweb about it at all! I wondered if you ever visisted there and if you had any memories of the place as a lot of your acts played there. There was also a video about the Liverpool scene with Carcass playing there shown on Granada TV, again nothing on the net!
On a related note one of the local bands to come out of that scene was Anathema. They played there many times and back then when they where coming up there was a real hype around them and they looked set to be massive. After I dropped out of the DM scene I was shocked to find out that they turned into some massive Pink Floyd sound alike rock band! I wondered if you ever thought of signing them before they signed to Peaceville, if you rated them back then and what you think of their subsequent transformation.
Anyway great blog, great label.


Answer: Cheers Ste, thanks for reminding me what great gigs took place at Planet X in Liverpool, it hosted nearly all the early UK hardcore and grindcore bands' early shows. I don't know you, but I guess we were at many of the same gigs together because I loved travelling up to Liverpool, I'd stay at friends houses like early Liverpool punk/HC scenesters Middie, Pek, Granny and also Carcass' Bill Steers parents place out in Heswall.I remember a local HC act Jailcell Recipes would open many of the shows.

The buzz around the HC/grindcore bands was special in Liverpool which made the gigs more exciting, even if it was only 15 people, they were diehards! I dunno why, Scousers are just more down to earth, and seem more intense about their music, and life in general it seems.I loved visiting the city for that reason.

The reason you can't find it on the web is because you are forgetting it was actually first and foremost a Goth club.Maybe you did'nt know that? The main clientele was the massive gothic/alernative scene of the mid-late 80s.Hundreds of em would pack the club to the rafters every weekend, grooving to the likes of Sisters Of Mercy or The Cult.The club runners had a 25th anniversary reunion night a year ago.Spot anyone you know? The club even has a Myspace and is planning more reunion nights.

Back in the late 80s, no clubs would book grindcore, it was unlistenable noise to most ears, and it had no fan-base to speak of, outside of the couple of dozen dudes who played in the bands.Planet X was the place everyone played simply because the club owners were open-minded and kind enough to allow hiring out of the the club to outsiders,so people like local HC stalwart Pete C would promote and arrange many of the early grindcore gigs there himself. 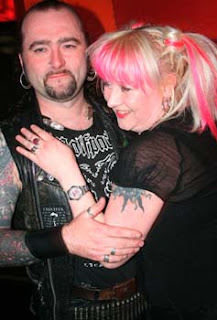 I think I even stayed for the club night once, being in no hurry to go home after the gig. I remember the club transformed itself at dusk, the stacks of TV sets at the top of the stairs would come to life and start playing horror movies, and in no time at all the club would he heaving as hundreds of goths would descend.

Pictured right is HC scenester and down for lifer, Pek at the 25 yr reunion club.

Try searching Planet X Goth and you get tons of results. 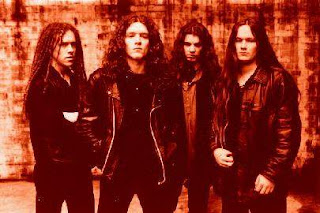 Regarding Anathema, for some reason they were never on my radar.Seemingly out of nowhere they were snapped up by Peaceville early on, and along with Paradise Lost and My Dying Bride became the big 3 bands on that label, forging this brand new sound of doom-laden Gothic rock, to much acclaim, and deservedly so.

For me personally, they just weren't grindcore enough for my tastes, and I have never much followed what they were up as far as releases go. I think I've only barely met the Kavanaghs once or twice, we were in the same early 90s "death/doom/grind" scene, but moved in different circles.

Actually Earache's label manager Dan Tobin was working at Peaceville in the early 90s and he's told me about Anathema's early years, he travelled with them on their first tours abroad.That band endured a level of hardship in the early days which lesser bands surely could not stomach.A lot of bands I work with are stony broke when they are starting out but the level of poverty within that band was shocking, they had literally nothing 'cept some instruments and their own self-belief.Anathema deserves respect for breaking out of Liverpool onto the world stage through sheer hard work, and talent.

Nowadays as you say they have mutated into a biggish selling progressive rock outfit, they have a dual fanbase because they can play to huge metal festival audiences as well as to folky-art gatherings when they go acoustic.
Posted by Digby at 12:30 AM

on new year eve 04/05, some of us sneaked into the abandoned club and did a gig. 2 bands, down and outs (with me, mark, from SSS) and walk the plank (with pete and dave from SSS).

here's a song of down and outs playing down there.
http://www.youtube.com/watch?v=q_OVqfveS8A

you didn't answer the anathema part...but why?

Hi Digg, thanks for taking tim to answer my question. I had no idea that it turned into a goth club after the bands finished!LOL

That myspace page has some of the posters for the old gigs on there and looking back over it there where some unbelievable line ups. Napalm Death for 3 quid?! hahaha

I'd love to find that Carcass vid off granada TV if anyone can find it.

Remember going to Planet X to see snuff. What i remember is going down some precarious steps and the inside having very low arched ceilings like under arches type of thing. I also (sort of) remember drinking a lot of Red Stripe that night as it was pretty cheap for a club and generally having a top night!

I used to go to Planet x around 85-90 and can remember bands playing there such as Bomb Disneyland, Paradise Lost (what seemed like every week) Christ on Parade, Carcass, Electro Hippies (last gig which I believe was recorded and released as a live album) and loads of others. What a great place, if only there was a place like that today.

I loved planet x so many hardcore bands played.Loved the all dayers and nearly every wk/end there was some decent crust band on.First gig i went to was e.n.t. and i nearly robbed deans jacket but he came back out into the alley.Anyone remember those straight edgers who would try and tip your drink away and bump into you?

There are some pics etc from when we broke into Planet X on my blog, check it out.

Was a great gig. I had a video of Carcass & Drudge playing but god knows where that is these days.

The best thing about that gig was the flyer saying DISCHARGE (will not be playing!)

The sand was in my shoes for days.

I saw Jailcell Recipes along with about 8 other bands do a gig that lasted about 9-11 hours. Started around midday. What a gig. Loved that place.

I went a few times. I remember the toilet always had an inch of water on the floor. I saw babes in toyland perform there. also, a mates band played there called 'rude vibes in vegas' who supported the wedding present there.

did my first blotter there as a kid...watching radio mongolia......used to go to listen lekky eads..both were regulars in that place..i remember loads of teles in there, and a tiny little door way..you had to knock on a letter box on some side street near moorfields.