Why no Bill Steer in Carcass' 'Incarnated..' clip? 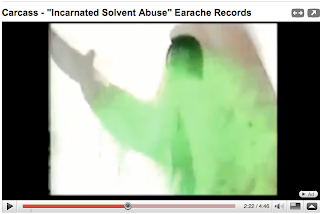 Question: Hi!, why does Bill Steer doesnt appears in the Incarnated Solvent Abuse video?
Thanks From: gael515@hotmail.com


Answer: I had'nt watched this clip in years so checked it out on Youtube.Which reminds me, I gotta have words with that fucking Smitty from Krank/Blank TV again, he uploaded tons of our clips to YT and claims them as his own to receive advertising revenue from Google.Naughty boy.

Anyway, this clip was made in 1991 and it is Carcass' first ever promo clip.The Earache grindcore bands were not known for exploring the visual medium, they more or less existed just to make extreme noise on record and on stage, anything else was deemed unimportant as MTV were certainly not going to be airing any grindcore bands clips anytime soon, or so they thought. I had to more or less hassle them into making videos, and appearing in front of cameras in general, I saw promo clips as a good promotional tool.Back then there were no digital metal TV channels or YouTube, so clips were made for VHS retail compilations and occasional plays from VHS on TVs in the corner of metal stores.

Carcass themselves came up with the concept and did the filming and editing i think. I recall being amazed at how impressive the clip looked with basically a rubber sheet for a prop. The lack of Bill Steer did not phase anyone at the time, but looking back it is odd how he doesn't appear, except I think he is just visible for a second during the 2nd solo.I hazard a guess that he didnt want to take his T-shirt off, yeah the explanation could be as mundane as that, he didnt want to be filmed bare-chested.

For various reasons this clip was controversial to those that saw it at the time, a Grindcore band playing bare chested wasn't really deemed cool.Also an inexplicable "Hitler Salute' somehow appears in the clip at 2:20, the band are certainly not racists, quite the opposite in fact, but the super-imposition of effects makes looks like Jeff is giving a Nazi salute in this clip. It caused an outrage at the time.

Is that not Bill playing the red guitar? You can see him clearly at the start of the video standing on a speaker cabinet, as well as other times throughout the video (or am I missing something here)?

is hoping you sue that smitty character for all he's worth the cheeky bastard!