New Trad HM -its all about the singer now, not the riffs 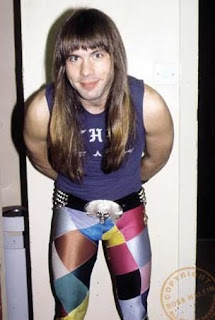 Question: Do you think that this view of yours that the nwothm bands have to have a two octave singer is a little shallow? For me bands like venom, tank, warfare, hell and deliverance(uk) were just as an important were just as important for the nwobhm as their more melodic counterparts, with deliverance having more influence later on just ask darkthrone. From:


Answer: I stand by what I said in a previous blog posting, but I do know where you are coming from, and sort of agree with you.Of course the original NWOBHM was a very broad church, as long as it was genuine metal and played from the heart, it was deemed NWOBHM, and it stretched from the ultimate trailblazers and leaders like Iron Maiden and Judas Priest, both of which boasted world-class powerful 3 octave range vocalists, to the other end of the scale of the gruff growlers like Motorhead and Venom and Tank.Actually one of my all-time faves from the old school is the severely under-rated Atomkraft who are like the Venom no one remembers.

I'm not so sure about the Deliverance reference.From memory that started as a kinda in-joke HM band from the late 80's, wasn't it something to do with members of VIRUS?

Fenriz does his band of the week on the Darkthrone blog and he unearths some real gems in his column like the brilliant Salute.But his tastes veer towards the basic mid-tempo monochrome crusty punk/metal and thats a style I'm pretty much bored with, with a few exceptions.

If you have Spotify you can hear what all the fuss is about on theHeavy Metal Killers comp. Latest dudes to get the NWOTHM bug are Ryan and Phil from Municipal Waste who have formed a decent NWOBHM band called VOLT-URE.
Posted by Digby at 12:21 PM