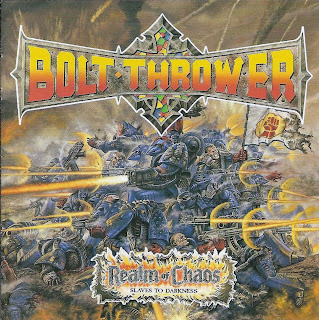 Question: Hi,
How come Bolt Thrower's Realm of Chaos has a new cover? Did GW drop the rights to use it or what? John Sibbick's a killer artist, but I have to say I do prefer the original cover. Do you still have the original in stock? I noticed it in the store but I've contacted one of your guys before and he said he hadn't seen the original artwork version at all in years. Any info you can provide will be greatly appreciated.
Cheers,
G From: roadkill_demon@hotmail.com


Answer: This question is a cause of much consternation between Earache and Bolt Thrower.In short, you are exactly right- the original sleeve art was the property of Games Workshop, not Earache or Bolt Thrower and when the lease on its use ran out in around 2002 or so, we approached the famous Fantasy Wargaming company for a renewal which was flatly refused to us.This refusal knocked us for six.

So we faced a harsh decision to either discontinue the album, or commission new art by the same artist in a similar style and theme, but being careful to not fall foul of copyright laws. Bolt Thrower themselves were pretty unhelpful by insisting that the orginal be used in further pressings, but this was impossible as it wasn't ours or their art to use, it was Games Workshops artwork and copyrights.Luckily we had seperately commissioned the actual Bolt Thrower logo, drawn by Mark Craven, so could still use that at least! 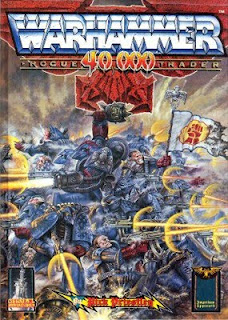 John Sibbick drew the original artwork under commission by Games Worshop. Back in the 80s the original edition of the company's biggest fantasy wargame 'Warhammer 40,000' had this artwork adorning the box cover.Everything about it is copyrighted to the hilt, right up to the design of the weapons, and even the logos on the clothing of the Space Marines fighting in the picture.We obtained the rights to use it after an exceedingly friendly meeting with the managing Director Bryan Ansell of Games Workshop, and Andy Jones the general manager. The company was small but growing fast at the time, and being based in Nottingham's Lace Market area, it was a short walk from our office.The guys saw the sense in reaching out to the Rock/metal market which Earache and Bol Thrower offered by using their art on an actual release- and a deal was struck.It was a one page contract/bit of paper saying we had rights to use it lasting 13 years. 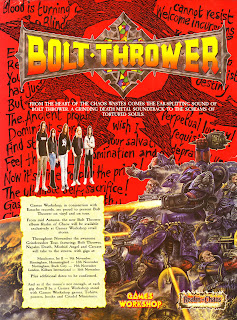 By the time of 2002 or so the Gsmes workshop company had become a global billion dollar corporate behemoth.When we asked for a renewal of the artwork rights, it suddenly dawned on us that this wasn't the same local company I met with 13 years beforehand.We were hit with a barrage of legal letters, cease and desist and copyright infringment claims.It was as if the company in its new corporate form had never heard of us, accusing us of theft of their highly prized copyrighted art in the first place.We avoided all contact with GW after that. 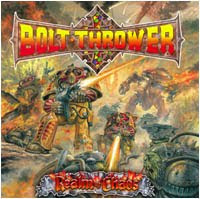 So the only solution was to try to track down the artist John Sibbick who had long since left the Wargaming art scene, his new career was as a highly respected artist drawing dinosaurs for scientific papers and research. Luckily when he heard of our dilemma he agreed to kindly redraw similar themed artwork but without any GW copyrighted elements. This is the art used on the new edition from 2004 onwards.
Posted by Digby at 11:44 PM

I also prefer the original artwork but there,s not much to do when a company of their caliber says no. I guess it would have cost you a fortune to use it anyway.

What was the big problem with Bolt Thrower? I guess they can understand the problematic with the artwork. They could have commissioned an artist themselves or have selected another piece for the cover. I've read really bad comments from them on Earache so I wonder if this was the only point of debate between your label and the band.

The new artwork still has a similar feel so it's not all bad.

Do you have any plans to re-issue the Bolt Thrower albums on LP?

Sigh, yet more GW being Douchebags. Would it have hurt them so much to extend the licence? What a bunch of gitz.At least Earache have been excellent in a) furnishing a full and friendly answer, b)going to great lengths to track down and commission the original artist. They could very easily have put the re-release out with any old cover but put a lot of money and effort into staying as faithful as they could be to the original.