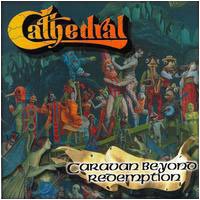 Question: I was given a free CD a few years ago, (roughly 1999) I think it was a lable sampler/promo type thing for earache records. It had Misery Loves Co.\'s Your Vision was Never Mine to Share, and some stuff by Mortiis on, among other stuff. Anyway, There was a tune on it called Black Wednesday ( I think) Would you be able to tell me who it was by? Do they have any other records out? All attempts at Googling/searching internet sites has been fruitless. Cheers :) From: hellolewis@hotmail.com

Answer: it might be Cathedral's Black Sunday- taken from the 1999 album Caravan beyond Redemption
Posted by Digby at 12:08 PM