Praise be to Earache & Napalm Death!! 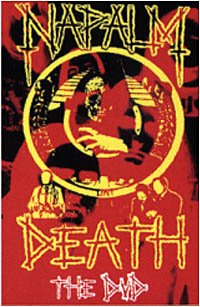 Question: Just a quick \'shout out\' and thanks to Dig and Dan Tobin. Been breaking down parts of the Napalm Death \'The DVD\' and a big \'thank you\' for the \'89 gig. I think this gig really demonstrates the bands past present and future at that time and it just so awesome to watch everyone invading the stage on \'unchallenged hate\' to where Jesse had to stop playing. But more importantly I think this gig captures the \'best of\' on the track \'human garbage\' one of my favorite tracks that never got the production it deserved in the studio. Live this track just blows me away by the speed and guitar tone and overall \'sound\' colin got from this lineup.

A big cheers to you both for this!!! Definitely a conversation piece for the new school and old school fan.

Answer: thanks Jim! glad you enjoyed the DVD...yeah in 1989 Napalm death were pretty much the flagbearers of a new super-extreme music, and earache was the only label releasing that stuff, dubbed 'grindcore' by Mick harris.At the time i dont think anyone involved had any clue that almost 20 years later we'd be watching extreme music be so massive and popular worldwide.it's quite satisfying to see how it turned out.
Posted by Digby at 1:02 AM