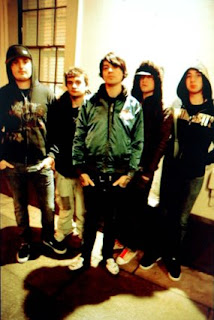 Question: A band I left out of the aussie band question but really want to hear your opinion of is the red shore? Just interested as they are probably one of the more savage of the deathcore bands going. for me at the moment its between them, oceano and through the eyes of the dead for the scene leaders of the genre.

also you say about the traditionalists despising deathcore im just curious as to what your opinion is to the deathcore producer of choice beingn erik rutan? Someone who most people would class as a traditionalst because of hate eternal and morbid angel, hes become to deathcore what adam d is to metalcore. From:

Answer: I agree with every thing you say mate.Red Shore are the best Aussie Deathcore- especialy after all they've been through. They had a tragic van flip in Decemeber 2007 while on tour in Australia, the vocalist and a roadie were killed at the scene.This was eerily similar to the Decapitated bus crash in which drummer Vitek was killed and singer Covan severely head injured- both crashes happened in late 2007.It still doesn't seem real.

As for bands leading the way-I agree again, but don't forget our newest Earache signing-Michigan heavyweights And Hell Followed With- if you have sub-bass speakers attached to yer PC this band will crush the air out of your lungs, its so heavy and percussive.

Erik Rutan is becoming the man who is linking the past 80's/90's Death Metal scene with the present Deathcore legions.As guitarist in Morbid Angel and later Hate Eternal (who on stage are one of the most unrelentingly brutal bands I've ever seen) he helped shaped the early Death Metal scene, and now as a producer he is helping shape the sound of Deathcore in the studio. He's mixing the new Annotations of An Autopsy album we hear.
Posted by Digby at 1:16 PM