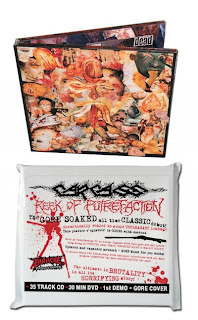 Question: Hey Dig (or associate.. ha.) er, I was wondering if I could ask you a pretty controversial question?
What is your personal favourite CD/LP from the Earache catalogue??
As it's unfair for me not to venture mine - it's Covenant by Morbid Angel, but was, for a long time, Symphonies Of Sickness by the immortal Carcass.
Cheers for your time.
(And please don't be diplomatic).


Answer: Well there's about 400 to choose from Russ! It might seem weird but I've honestly loved every release I've put out- many of them have been my personal faves at the time of release.Wether they caught-on or not wasn't my concern, I just felt they needed to be released at the time.Its a cliche but the Earache catalog is pretty much a timeline of my own musical tastes over 2 decades, with the mid-90's detours for hard techno/drum n bass included.

I've been asked which is my fave many times- and, after the obvious choice of Napalm Death's "Scum", I always answer Reek Of Putrefaction the debut album by CARCASS. I think because it was the first album which completely broke away from the recent past of the mid 80s Hardcore punk scene.Many early Earache releases had a hang-over from the HC punk scene which predated grindcore, Napalm Death's Scum was groundbreaking in so many ways, but its attitude was formed by the past.Reek was the first to signpost grindcore's more death-metal flavoured, extremely grisly future, and it was equally as revolutionary as Scum, if not more so.I like it for what it represented more than anything.

Likewise Morbid Angel's debut Altars of Madness, which kickstarted (along with Death) interest in the whole Florida Death Metal scene, or Scorn's Evanescence album which predated the coming Dubstep scene by a decade.Both album's represented something fresh in music, Earache always trys to push the envelope, to stretch the listeners boundaries a bit.

Some of the past releases I still enjoy listening to,happen to also be the label's poorest sellers- for some reason, they simply did not catch on at the time but made fantastic music in my opinion.Both Brighton UK's Ewigkeit and Sacramento's Shortie disappeared without trace after making 2 poorly received albums for Earache.See clips below.