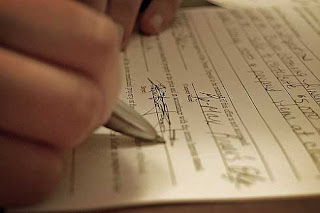 Question: this is a question i have always wanted to know, when a band speaks to you and says here is my cd and you take it away and like the music, is that enough for you to sign them, or do you look at there myspace and see how many plays and friends they have on myspace and if bands has loads of plays and friend does that go in there favour? From: point1point2@hotmail,com

Answer: I've said it before on this site- but its worth mentioning again - most unsigned bands have no clue of the scale of the competition to get signed, the numbers of bands clamouring to be signed is vast.You have to stand out from the pack because we get approached for consideration from at least 50 bands a week, and thats when record labels like Earache are supposedly in decline as the internet is freely available for bands to promote themselves and distribute their music.The bloggers and pundits who predict the decline of the record label as more bands embrace web 2.0 tools, well someone needs to announce the news to the thousands of bands we hear from each year, cos they don't seem to have gotten that memo.

Creativity is the name of the game, and my best peice of advice is- if you want to send a CD to a label, make sure you get a large package and include something to catch the eye of the A&R person- a few cans of lager works for us! Honestly, such a simple thing will mark you out as both highly creative and good at self-promoting, exactly the things labels are looking for.

1) 90% are rank novices who picked up their instruments maybe a mere 3 months prior to making a demo, these are the bands who probably send us the first 4 songs ever written.Mostly they are dire and simply playing 30 seconds of one song tells us this fact, we hit the pause button fast.

2) 10% of bands are much more accomplished and genuinely decent sounding- many bands have excellent sounding demos these days- but are too obviously ape-ing the influences found in their own record collections.After a few plays we lose interest because the all important spark and originality is lacking.

3) The last type are the rarest of bands,probably amounting to 0.1%, its those who tick all the boxes,show originality, operate as a team unit, and are driven to succeed.A retro type of sound can be highly contemporary if no-one else around sounds like it.A great example is Earache is in the midst of signing new bands who sound like NWOBHM right now. These bands have that added X-factor which I can't fully describe, but its more than merely playing well or being tight, these bands have a focus and a burning ambition to do well, which makes them simply crying out to be signed, and its obvious immediately. The word of a great new band reaches all the labels at internet speed these days, and a bidding war often ensues for new Metal talent.

MySpace playcounts have been the scorecard by which a whole new new breed of labels did their A&R between 2004--2009.Specialising in the Myspace music-scene styles like emo/screamo & lately deathcore, the playcount was a sure fire indication of actual popularity and it meant anyone - I mean anyone- could be a great A&R person simply by monitoring playcounts on the site, by skillful use of the search box.

This is exactly how Mark from new Nottingham label In At The Deep End told me he used to 'discover' Californian Death-core outfit Suicide Silence, and for a few years IATDE records put out the first Suicide Silence record here in UK to great acclaim.
Posted by Digby at 11:08 AM

I just wanted to make a point that there are a huge number of bands now using botting programs to significantly boost up their profile views and play counts. Seems to me that this makes the idea of taking notice of bands based on these criteria quite arbitrary.