Viking Skull- The Daddies of the NWOTHM scene? 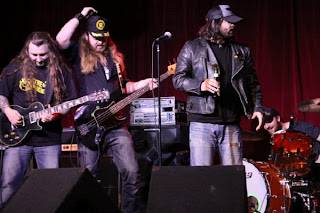 what do you think of the argument that it was viking skull who kick started interest in the nwothm in the uk? by that i mean the switch from clean sounding metal like dragonforce to the more dirty early maiden, thin lizzy inspired sound. if this is the case that means interest in a genre came from a joke as the band was formed as a way of scaving beer out of promoters.


Answer: Well that's an interesting argument because I've not heard of Viking Skull being referred to in those terms before, except by whoever compiled the Metal Hammer magazine NWOTHM CD from earlier this year. Obviously it depends on how you view the scene, the NWOTHM, New Wave Of True Heavy Metal (or as I prefer to call it now - New Traditional HM) and I reckon there is a grain of truth in that. By grain, I mean like barely one percent though.

Viking Skull are a UK band which was an offshoot of HC/Sludge-metallers Raging Speedhorn, and they do have an undeniably more Rock n Roll sound than most of their contemporaries in the UK scene. Much like Orange Goblin, they owe a lot to the likes of Clutch, playing a no-frills, mid-tempo dirty rock, but sadly, to my ears,its just not Traditional enough HM. There is a world of difference between Trucker-cap wearing dirty rock n roll and the nimble riffage and song structures of Traditional HM.

The down-tuning is wrong for a start because NWOTHM is all about standard tuned guitars, but even more crucially, Viking Skull lack the most important ingredient of the lot- a powerful 2 octave range vocalist, which is what makes the new young HM bands- like Cauldron and White Wizzard and Enforcer- stand out from the crowd in my opinion.

Cauldron & Enforcer embark on their first NWOTHM US tour later this month: