Why are ANNIHILATOR's re-issues only for sale in Europe? 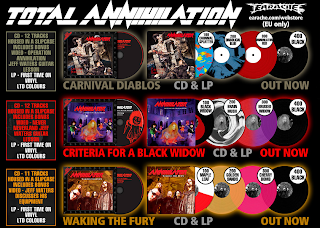 Question: Hello Gentlemen. As a Canadian thrash-addict who only recently discovered the greatness of Annihilator, I have this question for you. Why is it that your recent re-issues of Annihilator albums are Euro-only? Since Annihilator is culturally significant in every way, I think it's unfair that us Canadians can't get a copy, considering the originals are hard to find these days. Are you trying to break my heart? From: kkoivisto11@gmail.com


Answer: Simple answer to your question is that the license deal we have struck for re-issues of 6 selected titles from ANNIHILATOR's back catalog, plus the new studio album 'ANNIHILATOR' is strictly for Europe ONLY, so we regret that we are unable to fulfill orders for the Cd and the multi-coloured vinyl editions from countries outside the EU. 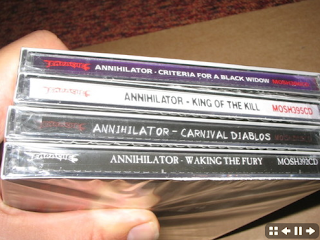 I agree that its unfortunate that Canadian and USA fans are forced to purchase the re-issues at hugely inflated import prices from third party European vendors like say Nuclear Blast mailorder (unlike Earache, they have no restrictions who they can sell to) but that's just the way it is.

We believe Jeff Waters is working on striking deals to make the albums available domestically on physical formats, but for now the only official channel is iTunes.

We get constant emails from ANNIHILATOR fans back in their home country of Canada feeling hard done by, but on the flipside, European fans are getting a rare treat. 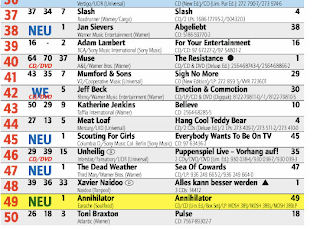 The new ANNIHILATOR self titled CD marked a real return to form for the thrash veterans and fans responded in great numbers, propelling the CD to enter the German Top 50 National Charts back in July.This has led to renewed interest in the band from concert promotors and fans alike.

This interest has culminated in a full-scale EU touring stint which kicks off next week in Paris. Any self-respecting Thrash fan should come out to a show to see how the maestro Jeff Waters and his band perform countless thrash classics in a live setting. See dates to the right.

Meanwhile worldwide fans of the band can grab a FREE Downloadable compilation of 14 songs from the re-issued albums.This comp is available from http://www.earache.com/totalannihilation Just enter a valid email address and the album can be yours. 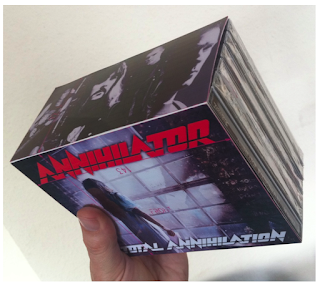 As another treat Earache will soon make available for FREE a sturdy bookshelf box which is suitable for housing all 6 of the CD reissues. It comes with a personal message from Jeff Waters and is signed.Any ANNIHILATOR fan will need this to make their CD collection complete, and its completely free. Details on how to obtain it will be revealed in the CDs themselves and on our website soon. Heres a mock up of how it looks.

Finally heres Jeff with message to European fans to come out to a show on the tour- see you there! Come out and Thrash!! 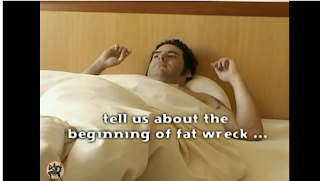 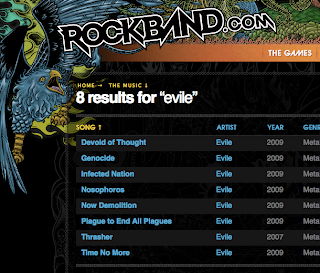 Question: I've noticed you guys made the Evile tracks for the Rock Band series.

I was wondering if you guys will make more tracks for other bands on the label, such as Bonded By Blood and Morbid Angel? Would appreciate it! From: morbidjared@gmail.com

Answer:Thanks for noticing that there are currently about 7 EVILE songs for sale and play on the Rock Band network. RBN is different from the Rock Band game site-because any band can encode and upload their own music.

Eventually there will be the complete EVILE Infected Nations album on RBN, 9 songs complete with bonus track. Earache is using the talents of Evile guitarist Ol Drake to do the encoding, its a slow laborious process but hopefully the fans will enjoy the results.

As for new material- yeah Earache is a big fan of the game and wants to support it- so we intend to encode and upload many more songs. You must have read our mind because the next uploads will actually be BONDED BY BLOOD Prototype Death machine and also a Morbid Angel track, along with probably WHITE WIZZARD Over The Top.

The Morbid Angel song is complicated to encode because the original audio instrument masters (multi-tracks reels) are pretty vintage now, about 20+ years old, and need a special 2 inch tape machine to play them back on.The machines still exist but are rare and difficult to source. We are in the process of doing this for Blessed Are The Sick, but haven't yet decided which song from that album to release on RBN. Feel free to make a suggestion in the comments for any tracks from Earache you want to play on RBN.

Meanwhile here is BONDED BY BLOOD- coming soon to RBN.