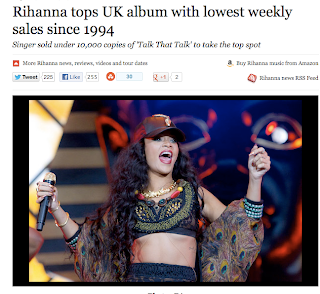 Question: Hi, how do you feel about the news of the Rihanna album being the lowest selling number 1 album of all time? Does this affect metal labels as yourself?
From: Tim Lineingham

Answer: Earache is not really interested in how Pop stars are performing in the charts, but the news of Rihanna selling a paltry 9,000 albums to claim the top spot in the UK chart  last week (the lowest ever since records began) sent a ripple of concern around the Music Biz generally here. Frowns all round.

People were quick to comment that its the traditional mid-summer slump because people are on the beach or out and about on holidays,  so not bothering with buying records, which is true, and sales do dip mid-summer every year anyway, but this was more dramatic than before. Also true is the fact that the UK is currently in recession, and spare money is hard to come by.  Both decent explanations.

The way that fans consume music is also changing - although CD sales and legal iTunes downloads count towards the  Official UK chart,  streaming music services like Spotify do not yet. Legal streams have their own brand new UK streaming chart, but that is not widely circulated outside the biz. Illegal torrents  or audio which is  file-shared of course does not count towards the UK Official Top 40 chart, even though billions of songs are consumed that way daily, because they are not paid for, and not trackable (yet). YouTube views don't count to any chart either.

Prior to 91-1994  the Official  Top 40 charts were compiled the old school way,  by each record store tallying by hand their over the counter sales each week,  and handing the scores over to the chart company. It was a simple task, subject to human whims, so every week the charts were skewed by enthusiastic record store owners passing on false and  inflated sales numbers of their favourite artists, usually white middle-class Indie Rock.

However, in 1991 (US ) and 94 (UK)  the chart system was revolutionised because barcode reading at the checkout came in. This Soundscan era democratised  the charts, finally giving a true-ish reflection of national music tastes, and its safe to say that it totally rocked the Biz. Suddenly and quite unexpectedly,  albums of Rap artists began to dominate the upper echelons of the US Top 40. They were selling beforehand, but just not even counted before under the old -often fraudulent -system.

In the UK  around the same time, a nationwide survey was carried out  to investigate what is the best selling music in this country. The surprising result was that a form of Punjabi Traditional folk/dance music known as Bhangra is the biggest selling music here, selling enormous amounts of Cds via small Indian retail stores around the country. Almost none are sold in the traditional record shops, so the sound rarely dents the UK Top 40.  I'm sure the Artists involved aren't too concerned about it.

Many types of music exist under the radar of the Official chart compilers- rave and grime had been massively popular in the clubs and on the streets here for decades, but only in recent years have major labels drawn upon the large fanbase of artists like Dizzee Rascal to release his records and hence end up topping the charts. His hit ' Bonkers ' was even aired during the London Olympics opening ceremony.

Metal is traditionally a very under-represented genre in the UK Top 40 chart, relying on the sheer numbers of fans who buy on week one  to sporadically chart. Sadly, those albums then promptly drop out of the chart next week, because the genre receives very little or no mainstream Radio or TV to support it.

It's been this way for ever, until last year in Germany where the chart compilers made a subtle change to the rules whereby the overall revenue of an album counts to its chart tally, rather than purely the number of units shifted. This was made to counter the unfair advantage of  Major Labels who could routinely discount Pop albums by huge amounts  (often selling for equivalent of $3) and so gain unfair leverage at stores, and gain sales advantage from that.

Metal fans  in Germany have traditionally bought high value items, special editions and limited box sets  by their favourite bands, often direct from mailorders or direct from the labels. Low in units but high in value- and due to the rule change, the income from those sales now counts towards the chart tally, giving a welcome  boost to the chart prospects of metal bands. 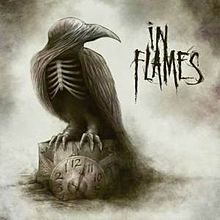 The great benefit was that was that big selling metal acts now tend to place higher in the German charts than ever before. Century Media pulled off a miracle with it's  impeccable marketing campain to secure In Flames "Sounds of a Playground Fading"  the bands (and label's) first ever Number 1 chart placing in German National charts, where previously they had only graced top 10.

As far as Earache is concerned, we are gearing up for Rival Sons Head Down next month and we fully expect it to chart in 5 countries across EU, but personally its the sales of the album over time which interests me most, because I'm too aware that chart positions are a purely artificial and fading concept in the coming era of streams and Youtube view counts. You could even argue that merch sales and concert ticket sales are more important to a bands long term career than a one-shot chart number that only exists for 7 days anyway.