Was Carcass Necroticism CD part of the 'loudness war' ? 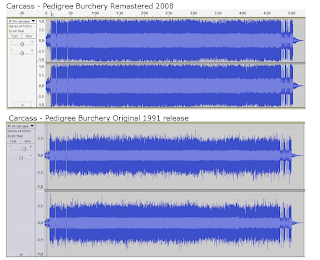 You wrote on this blog:
"Earache is not into the Loudness War and we master our Cds carefully, not brickwalled to the max." And you sympathize with "turn me up"?

I just bought Carcass Necroticism Descanting the Insalubrious 2008 release Dualdisc. I regret it.

The EQ of the guitars does not sound as good as the original but the worst part: It is bricked! The peaks are cut off. Why compress? What's the point of playing this on my hifi-system? Okey, i have seen worse remasters...

I compared 1991 and 2008 release in an audio editor. Image can be found above, or this link

Why did i bought the 2008 release? My original CD is damaged and i only have a FLAC backup. Now i have to find the original 1991 CD release on discogs or something...

Answer: Well Robert, this is a pretty hot topic on this blog right now- I had no idea so many fans were eager for audiophile-type discussions. To answer your question- I don't believe the audio waveforms of Carcass pictured above give the full story, the truth is, both of them sound OK. 1991 is from the analog era so is immensely dynamic but way too low in volume according to modern -digital era- standards, this may or may not be a fault, it depends if reaching for the volume control spoils your enjoyment, because to many folks, it does. The 2008 on dualdisk (now outdated CD+DVD combo format) is noticeably louder, very acceptable according to modern standards, but it also retains a certain punch and dynamism. You can see the waveforms does retain all of the peaks and troughs, so it is definately not brickwalled.I'm glad you mention you've heard worse, so you accept its OK.

The problem is this: that for the period of late 90s to mid 00s most people were easily impressed/fooled by louder sounds,and powerful sound-manipulation software tools found its way into every artists studio. It's a sad fact that for 99% of the public (and 100% of musicians), a louder CD IS a better CD, or rather it was the converse which mattered to them - I've had fans complain that their quieter CD dating from the early 90s must be faulty somehow. The truth is that there are way more casual fans of music, even metal music, than audiophile fans.

Earache succumbed to the "Loudness war" for a lot of releases in that period, it was mostly the Industrial releases which would be brickwalled to insane levels of +5 dB simply so they'd sound more powerful on cybergoth/industrial dancefloor club systems.

Earache nowadays is quite proud to not take part in this foul practice- for proof, check out our Thrash and HM bands of recent years.Bands like White Wizzard, Cauldron, Evile are perfect examples of magnificently rich, warm, dynamic yet powerful albums, both on wax and disc. In fact Rival Sons album "Pressure and Time' should win awards for the perfect combo of clarity and punchy dynamism of its sound, plus it will blow your face off with it's sheer volume. That's a tricky skill to pull off.

As we enter 2012, the practice is very much old-hat now - the reason is not because of the concerns of audiophiles, but simply because most people consume music digitally either via Youtube, Spotify or iTunes and all these sites include their own built-in audio-limiting software, to make all tracks sound similar volume, this is to enhance the listening experience of the user, because having to reach for the volume control on the PC is more or less considered as a design fault to their users.

The loudness war is over on the Hi-Fi and on the computer- but appears to have moved to the TV set instead. Have you noticed how the adverts sound louder than the actual program/film itself? This is the advertisers using the age-old psycho-acoustic 'louder=better' tactic to make you remember their brand over the others in the ad-break. 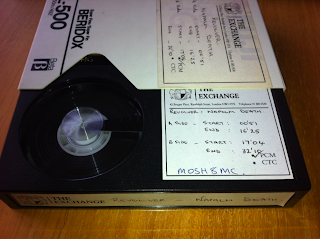 Heres a pic of the original 80s era PCM Betamax tape used for the Napalm Death "From Enslavement.." release on cassette.
Posted by Digby at 3:01 AM 1 comment: