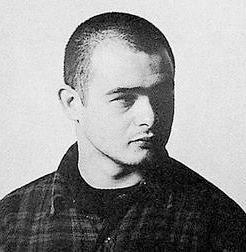 Hello, Dig. This question is in reference to a previous band on your roster,
Scorn. Scorn quickly became a favorite band of mine, unfortunately after the
closing of the band. While glancing at the wikipedia article during my
general exposure to the band, I noticed that it was stated that after the
release of 'Logghi Barroghi' Scorn parted ways with earache. My apologies
for the long intro; my question is as follows: Would it be possible for you
to go into the reasoning behind Scorn leaving Earache? I read this blog
quite regularly and I have yet to find the answer to this intriguing
question. I do realize that as you previously stated in a blog entry that
Earache was moving on from the Electronic scene and focusing your attention
back to Metal and it's various sub-genres. Would this be the basis for the
departing of Scorn? I thank you for your time and consideration.

Answer: Scorn mainman Mick Harris finally and officially closed the book on Scorn in November 2011, so if they became your favourites in the last 60 days, that's pretty bad timing dude, because they were around, on and off, for almost exactly 20 years. While on Earache Scorn released 5 albums and 4 EPs during a 4 year period, plus, I released Napalm Death records before that aswell. All in all, I spent around a decade supporting and promoting Mick's musical endeavours across two radically diverse genres. Napalm Death was successful, Scorn less so. It was either a gutsy move, or sheer stupidity, depending on your point of view, to quit the exploding death metal/grind scene he more or less helped create, to explore the abstract/dub/experimental scene as Scorn instead. During the decade he was on the label he invented and popularised two brand new genres of music - grindcore and (proto)dubstep - that's not too shabby is it?

If you are seeking some kind of juicy story to explain the end of Scorn on Earache, you're out of luck. The reality is far more mundane - after a decade of dwindling sales, interest just kind of fizzled out and it became obvious it was time for everyone to move on.

Minimalist, abstract, bass-heavy, dirty electronic music was simply not a thriving scene at that time. Scorn had nothing in common with the commercial dance scene which was booming in UK clubs by the mid-90s, nor did it fit in with the college/hipster crowd who were all into Apex Twin /Warp records. If anything Scorn was nearest to the then underground jungle/drum & bass scene which was mostly promoted on pirate radio and at illegal raves. I mentioned in a previous blog posting how Earache found it difficult to market and promote this music, we are a Rock/Metal label after all.

Here's 'Nut' from Scorn's final CD for the label, 1996's 'Logghi Barogghi'- so named after Mick overheard an American tourist mispronounce the town of Loughborough, which he thought hilarious.

In 1997 Scorn released the follow up album 'Zander' for new label Invisible Records (label of Martin Atkins, ex-Pil & NIN drummer). In my opinion the opening song Twitcher displayed the most vicious bass sound for over a decade, until the likes of modern-day dub-step producers like Skream came along. It was so far ahead of its time, its positively scary. Plug your sub-woofers in and watch your walls crumble to this:

If you fancy more bass-quakers, heres my faves in a Spotify playlist
WARNING: may damage your audio equipment and/or hearing!
Posted by Digby at 1:12 PM 7 comments: