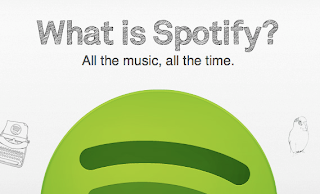 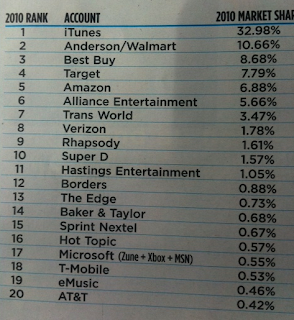 The make or break moment for Spotify is looming soon as it finally enters the USA marketplace next month. Similar streaming music sites already exist in some form - Pandora, Rdio and MOG being the front runners, but the European invasion is imminent. Some very high profile backers - including original Facebook investors- have invested in Spotify making it a billion dollar gamble. If they are smart they'll sort out immediately the shockingly poor front page, which simply displays a random selection of the latest uploads, without regard to my listening tastes, and is a major turn off for new users.
Posted by Digby at 2:44 PM No comments:

MORBID ANGEL: Illud Divinum Insanus - "This is Your One Warning"

Question: Just wondering what you think of Morbid's new cd.. I think they've lost their minds! So much potential for greatness... ::::facepalm:::
from: Rob Alaniz

Answer: Well I pre-ordered the wooden box special edition from Season Of Mist so I'm obviously still a fan of the band.I'm just playing IDI now on release day, and I honestly don't know what all the online fuss is about- OK it doesn't beat the B, C or D albums because they were ahead of their time and nothing could ever top their groundbreaking and classic A album- but it sounds pretty great to me on first listen. The production is dynamic and lively, which makes it an improvement over the sterile sounding H album. If anything its the 'weird' tracks which are the interesting parts for me.

After the traditional Laibach-esque instrumental as album opener, the album proper begins with David Vincent announcing, rather prophetically, "This is Your One Warning"- before a barrage of programmed kick drums take over and the band goes right into Too Extreme!. Frankly, I was blown away by the audacity of this, they could have chosen the "safe' option- but the band will have known full well that a song like this would polarise opinion right from the outset. Personally, I find the kick drum programs a bit 90s and a bit dated, but I really love the constantly pitch-changing FX on the guitars. This track's vibe is like teetering on the edge of chaos, which sums up everything about Morbid Angel.

On 'Radikult' and also to some extent 'I Am Morbid', overtly self-referential lyrics come to the fore, sung in an almost bragging style. This is new territory for Morbid Angel, and seems strange coming from a band who built their zealous fanbase by dealing in other-wordly, magical and mystical themes.

What is also different about this album - their first in 8 years- has been the absolute shitstorm of online opinion immediately prior to its release. This is their first album released during the highly socially-networked era, and to a very different generation of extreme music fans than those around for 2003's Heretic. Back then, there was no MySpace, YouTube or Facebook, even Blabbermouth was barely up and running- all fans had to exchange views and communicate were a few metal message boards and ye olde "word of mouth". Also new is the ease which which fans can download leaked Mp3 copies and seemingly have been doing so in their thousands in the week up to official release. It's pretty easy to be super-critical after downloading free files when you've not made any financial or emotional investment to obtain it.

Watching this shit-storm of hatred from so-called fans venting their spleen online has been the REAL eye-opener for me. I've never seen such a vitriolic backlash, except maybe following Metallica's 'St Anger', and even though Earache has nothing to do with the new album, it's been quite educational for me to follow the firestorm. I'm transfixed.

It seems everything we do online these days has turned into a popularity contest, the biggest sites ask you to register your like or dislike of whatever page you are on, the instant you land on it. Morbid Angel is a band who are pretty introspective, who steadfastly follow their own creative path, rarely if ever checking out what their peers are doing. As Trey says in interviews, they create their music firstly to satisfy their own creative instincts- not for any fan or journalists approval.Even so, I suspect they have never witnessed such a deluge of disapproval arriving at their doorstep,like this:


Whats laughable about this is David Vincent sings "Killer Kult, Killer Kult" at the beginning of Radikult yet the online geniuses/critics misheard the lyrics as "Kill a Cop Cop, Kill a Cop" and the baying mob swallowed it whole. When the critics cite "Bodycount called and want their lyrics back", which is patently wide of the mark, things really are way out of hand, and have reached the pinnacle of absurdity.

What is bemusing to me, is how fans are zeroing in on the weird tracks as if its a total sell-out to the death metal scene for a band to experiment a bit or break up the album flow with a different vibe. Morbid Angel has always done this, on every album since A. Admittedly the quirky interludes were short and were hardly main album songs.Often they were simply a chance for the band to indulge their Laibach or video game fantasies before returning to the main business of blasting, shredding death metal. Check out Trooper or Dreaming : 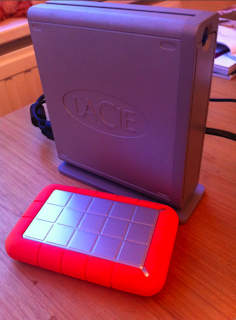 I'm pretty certain that a good proportion of the current generation of Death Metal fans will know the band only from single mp3 track downloads, or possibly even Youtube clips of the main songs from Morbid's back catalog.

This has made them pretty intolerant of anything but their fave tracks. I speculate that today's fans can't actually handle and are ill at ease with a complete 45 minute album. No-one has time to waste checking out the variety of vibes which can be displayed on an album anymore, mostly they'll just cherry pick the most well-known songs.

I suspect a good proportion of fans don't even actually play albums anymore- just mp3 collections of their favourite tracks.

Despite all the backlash, if what I'm hearing is true 2000 of the special wooden box editions are completely sold out, at £100+ a time, so you do the math! For Morbid Angel in 2011, its very much Death Metal business as usual.

[DISCLAIMER: I signed Morbid Angel and my label Earache released everything they recorded for the first 9 releases, working with them daily for almost 2 decades. Earache parted ways with the band in 2004, but we continue to promote their stellar back catalog and regularly co-operate with band and their management over re-issue campaigns.So,yes I'm biased.]

PS: When Trey talks about Terrorcore in interviews, I assume he means stuff like this: