Question: Hello, I want to ask you about first press CARCASS vinyls. How many were released not only on black vinyls. I founded out that there are one Reek of Putrefaction clear vinyl and two, one in normal sleve other in gatefold, red Symphonies of Sickness vinyls. How many more were released in the same time with the original black colour vinyls?

Please note that im talking not about re-releases in 2002, but about originals!


Answer: first press of carcass reek came in black vinyl only- about 3000 copies from memory in 1988.You can tell the difference between the 2002 re-issued LP because the original has NO BARCODE on the back.Also for a joke the record label says MUSH 6 rather than the actual MOSH 6 catalog number.The absolute first copies of the Reek album came with white square-ish sticker proclaiming it to the heaviest and sickest band in the world or some nonsense i dreamt up back then to sell it, that version is rare to find.
For symphonies of sickness the rare original 1989 is single black LP but in gatefld sleeve, and also 1000 copies in red vinyl.You can see the versions pictured on our catalog page.
Posted by Digby at 1:59 AM 2 comments:

Question: So whats the deal between earache and the newport south wales scene? its just being in a metal band myself ive been told \" you dont want to send a demo to earache, they fucked dub war\". Did Earache and Dub War part company on bad terms then and has this had a knock on effect on the entire scene, also out of interest does this happen often in the music scene

Answer:Wow thats pretty disappointing to hear...hey, instead of listening to know-it-alls in newport, why dont you ask Benji, Jeff or Ginge yourselves? they still live in Newport.Go Ask them! They had 5 top 50 hit singles during their time on Earache and a release on Columbia in America.So it wasnt too bad. Its funny to hear this because Jeff now and again personally sends me demos of bands who record in his studio- he sent me the Jeff Killed John demo(later to become it mighty Bullet For My Valentine) and Nochaa.Benji visits our office when he plays Rock City as Skindred.
It could be because of the scandalous review in Kerrang of our dub war re-issue, which stated quite wrongly that Dub War were mistreated while on the label.the mistreatment consisted of being dropped due to poor sales and unstable line up, but the band took it quite badly and as a knee jerk back-lash reaction slagged us off in the press including kerrang at the time- 1999 or so.Nowadays they know it was our business decision and have a different- more mature- opinion of their time on Earache.
Posted by Digby at 1:25 AM No comments:

Napalm Death- could have been like the SEX PISTOLS? 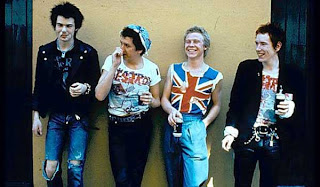 Question: Ok your probably sick of answering thease but heres another napalm question.

I was reading a justin broadrick interview and in it he said that napalm was meant to have been like the sex pistols in that they release one album have an impact and then split, He also said that he belives that scum is too long in that the album was only meant to have been side A and earache pushed for side B. Are thease statements true? or are they just theories of his many years after the events that happened.

Answer: Yeah i know what he means- I agree it would have been more apt and perhaps poetic if the band HAD split after scum...the band was so revolutionary, incendiary and confrontational i think the original members could never have imagined the band still being around in some form, 20 years later. That was quite unthinkable back then...i guess both Nik and Justin thought that having quit Napalm death, the band would naturally dissolve..but they didnt reckon on the resourcefullness of Mick harris who quickly recruited new members and carried on.Mick had a quite pragmatic reason to do this, cos the band was making money and he sensed a career in music was in the offing, he had no other options like joining other bands or a career in academia.Ironically, Mick had also quit within a few years also, leaving a whole new line up to fly the Napalm death flag to this day.
Justin is correct in that the demo that became the A_side was only about 20 minutes, and i deemed it not enough material to release it like that.So a B-side was insisted on- it took many months for the band to regroup and record the b-side material. then the finished album was released as 'Scum".
Posted by Digby at 12:55 AM No comments: