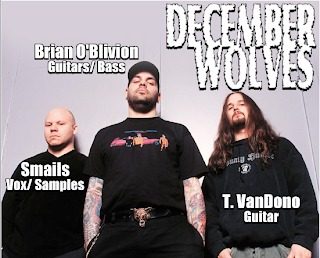 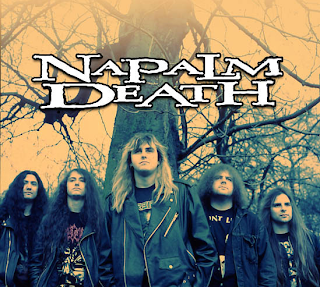 Hi!
Just wondering if, after the recent Nalpalm Death 3 x cd boxsets you recently issued, there were any plans to do the same to earlier Napalm Death Earache albums/ep's etc???

Also, as a fairly newcomer to the world of Napalm Death what are your feelings and recollections of the fairly vast style change between the 1st two albums and Harmony Corruption???

Also what do you think of their post Earache output???

Answer: Yes, I agree it must appear totally weird if you are a fan getting into the band in recent years, looking back, their Earache-era back catalog has 3 distinct phases - the breakthrough Scum/FETO era (now hailed as the classics), then the mid-paced Florida Death Metal-influenced era, and by mid-late 90s the band's ill-fated groove-grind period where the fanbase deserted them in huge numbers.

In the summer of 1989 Napalm Death had a massive and very abrupt change of line-up when guitarist Bill Steer and singer Lee Dorrian unexpectedly quit the group on their return from their first Japanese tour. Remaining members Mick Harris (drummer and driving force of the band) and Shane Embury (Bass) recruited 2 new guitarists from Los Angeles in the shape of Jesse Pintado & Mitch Harris (no relation) plus a local Death Metal singer Mark 'Barney' Greenway (who was previously a fan of the band and occasional ND roadie, as well as fronting Brummie Death metallers Benediction). This new-look line-up subsconciously meant the band had the opportunity to break from the past, with a fresh start and fresh outlook.

The new members had a stronger affinity to and were massive fans of the newly spawned Florida Death Metal scene and this came through in the follow up album, as opposed to the Hardcore/Crust Anarcho punk influences that they'd had previously. The band even decamped to Florida's Morrisound studios to record the Harmony Corruption album with hot producer Scott Burns.


Napalm Death during that era was a fast-moving and highly volatile entity- their rise from playing Birmingham pubs to sitting atop the UK Indie charts at number 1 was pretty meteoric, but this meant nothing to the newcomers, who were starting from scratch, but had pretty much walked into an already successful band and were given complete artistic freedom by Earache.

You should know that by 1989-90 the UK scene was awash with a ton of early Napalm Death sound-alikes, much to the bands annoyance. Since Mick and Shane have always prided themselves on being musically progressive, exploring new sounds and never standing still, pushing forward with new sounds comes as second nature. The fact is that the contemporary Florida death metal scene, led by Death, Morbid Angel, Deicide, Obituary & Massacre was just more exciting then say, crap like Sore Throat's endless joke-grind albums.

It was never actually intended that they piss off and alienate the early grindcore fans who had helped Napalm Death acheive their fame and career, however the album charted at 67 on the UK national Charts- which made it the first extreme metal album to chart- this meant the fans did appreciate it, and very much validated their decision.

As for their post-Earache output, I've not been that bothered to follow the band, but musically at least, either by design or accident, it seems the penny dropped because they immediately 'returned to form' making a succession of albums of intense blasting grind for a variety of new labels, which is all the fans wanted all along. Their longevity has meant they have proven themselves to be not only the originators but also the longest serving stalwarts of the scene they single-handedly created all those years ago.
Posted by Digby at 1:12 AM 3 comments: