When is the time right to re-issue old catalog? 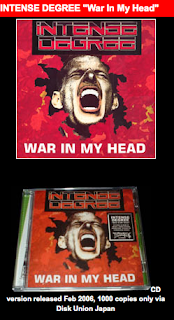 Question: I know Earache is a bit hesitant to re-release some titles in the back cataloge, some because of low sales originally, some because of lack of relevance to today's music buying public. For this reason I would like to say thanks for re-releasing the Sore Throat CD. I actually asked about that release on a previous blog, and pointed out how it was selling for upwards of $100 on Ebay, and you had joked that it didn't even cost that much to produce!! Then the cover comes out with it's own joke about Pay no less than 50 ponds on Ebay!! Haha! Anyway, my question is in two parts. First-what exactly is the criteria for a re-release? The Carcass/N.D./Cathedral/Entombed/Morbid Angel side of things is pretty obvious,but what about the more obscure releases? For example, Sore Throat, Unseen Terror and Spazztic Blurr, all had re-issues in the last decade or so, but you have made it abundantly clear (to one of my posts no less!) that you have no plans to do the same for O.L.D., Intense Degree, or even the Heresy/Concrete Sox split. This is not a plea for those LP's to see a CD version, but rather a question about what gets the green light and what stays in obscurity.

The other question deals with remastering. I loved the informative video about calling a truce in the "noise war", but was wondering what the actual technical difference between compression and remastering is. The newer Carcass CD's don't sound compressed, but the lastest round of Iron Maiden CD's do-although both were promoted as remasters. Any light to shed? Thanks for the time!!


Answer: Well it all depends on the buzz surrounding the bands. Earache is pretty proud of its back catalog releases, every band released on the label was carefully selected to represent the labels focus, and had a definate reason to be chosen when it did.The Earache back catalog list is pretty much a timeline of my favourite bands down the years.

I'm not really a nostalgic person, so the past bands Earache dealt with back in the day hold no particular fascination for me, mainly because we are too busy promoting and working with the current day signed acts.

The choice to re-issue on CD or LP is also quite a pragmatic one- it comes down to this: will we sell out the majority of the copies we print? Usually 1000 is the minimum printing to make it worthwhile.

We are constantly monitoring the buzz surrounding the back catalog bands and act accordingly. Many of Earache's bands which were prominent in the 90s had split up by the turn of the millenium as tastes in metal had changed and interest waned.

Luckily for all concerned the rise in file sharing and the ability to stream music on the internet lead to a renewed interest in extreme metal by mid-late 00's and as if by magic bands like BRUTAL TRUTH, SLEEP, CARCASS, AT THE GATES and most recently GODFLESH reactivated themselves to take advantage of the new-found interest in the genre that they had helped create in the first place. Cant blame them for that.

So, as you point out- Earache joined in the party by re-issuing the back catalog titles from the newly active bands, often with a bonus DVD or extra something to add value to the package.

For deep back catalog bands different reasons apply. In the case of SORE THROAT, even though the band has been defunct for 2 decades, the ex-members of the band are all pretty high profile even today - Hammy was until recently the head of Peaceville, Rich is active in Solstice and running his Miskatonic label, Johnny is these days a prime-time radio DJ for Kerrang radio and is a very popular metal personality in the Midlands. So when the deal offer came from Disk Union in Japan it felt right to do it. The same label also released Intense Degree on CD too, though I have no idea why because the only thing notable about them is Frank the drummer now plays in Assert.

OLD is a special case because I've decided to never re-issue that title specifically to thwart the collectors of the early Earache Mosh 1-10 set. As a result of which, the OLD LP has become quite highly prized and goes for stupid money on ebay. The other reason is as a kind of 'reward' and thank you to the early Earache fans who were there at the time and bought the early releases, including OLD. If you have an OLD LP you can cash it in for serious money now if you want.

Two of the HERESY members are active again in Geriatric Unit so yes, the idea of issuing the HERESY/SOX on CD crosses my mind now and again. Perhaps we'll wait for a Japanese label to make an offer before that one sees the light of day .
Posted by Digby at 12:57 PM 3 comments: