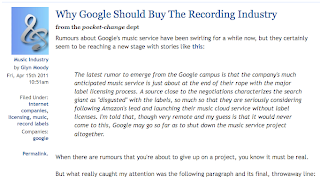 This posting on the famously anti-Music Biz site Techdirt has me incensed. From their one-sided viewpoint, it seems a rather trivial matter for Google to buy out the 4 major record companies and then control the access and usage of music online in the future. Free Mp3's for all, for ever, would be the result and music fans could rejoice at music finally being released from the clutches of the evil, slow, dumb Record companies. Everybody wins. Or do they??

Sure, undoubtedly GOOGLE's pockets are deep enough to do it. WARNERS is currently on the block and inviting bids in the region of $3 Billion. EMI, SONY/BMG could be bought for roughly the same and even the world's biggest Music Company UNIVERSAL could go for under $20 Billion. The entire Major label Recording Industry (minus the 1000s of Indies), if it was for sale, would fetch maybe $30 Billion maximum. Google's current market capitalisation is around $170 Billion so the founders could indeed buy the Music Biz with their pocket change, if they wanted. But why would they- the culture of the modern Tech companies is totally alien to the culture of the Music industry, it would be a disaster for all parties. I imagine Google would not take too kindly to Death Metal or gore-grind bands??

Google's worth is built on coding an immensely popular search engine for the internet during the last decade, whereas the Music Companies essentially tap into a tradition of human creativity and expression lasting for millennia. Classical Music dating from a few centuries ago is still popular because it is some of the finest forms of human expression ever conceived. A 1960's band The Beatles still regularly tops the itunes charts even in 2011, 50 years on. Whatever the format of music choice is in 2061, maybe it'll be some life-like hologram type gizmo I imagine, you can bet that The Beatles will still be relevant, yet Google will certainly be just a distant memory.

For the last 300 years music has been consumed via hand-written sheet music, printed sheet music, 78rpm records, vinyl LP, cassette,Compact disc and now the current Mp3 era. My point is- music transcends formats because it is an intrinsic part of our expression and culture. Search engines and targeted Ad-words are not meaningful to our human existence- but music is.

We have been here before- in the early history of the internet back in the 90s, the Google type behemoth of tech was AOL.Being the first ISP to allow the average Joe pain-free access to the internet, it became hugely popular during the early web era. At one point AOL boasted 30 Million subscribers and a market capitalisation of $240 Billion. Exceeding Google's paltry $170B as it stands at the moment. Things move at lightening pace in tech, todays tech titans all to often become tommorrows tech trash- see Netscape and countless other so-called "success stories" for proof. AOL was eventually sold to Time-Warner for a knock down price as tech moved on at its usual fast pace and AOL became seriously outmoded.

Myspace is showing signs of being the latest tech casualty- I'm sure a few years ago there might have been a similar clamour from the deluded tech-acolytes for MySpace to 'take on' or even 'buy outright' the music Biz. Nowadays its a busted flush, and its most likely fate is to be bought itself by a Record/Media company. Actually its reportedly on the block for $100 million as of late April 2011. News Corp paid $580 Million for Myspace a few years ago.Oh the ignominity!

In recent months Google's own share forecast has been downwards. Lately there has been talk of Google-owned You Tube tube beginning to start acting like a entertainment company and create its own content. Apparently YouTube is investing $100 million in exclusive and high quality content. I guess relying on a succession of viral hits is not really a way to build a sustainable business. There are only so many Skateboading dogs or cute kitties to go around- they provide a few LOL moments but don't have the power to touch or effect people's lives as music so often does.

Music makes up 30% of all YouTube streams, and 6 of the top 10 twitter accounts are musicians.This remarkable statistic bares repeating- how come its not sports stars or actors or TV personalities which form the bulk of their content and earn those companies millions in ad revenue? Ironically, it's the new tech companies which have benefited most from the countless talented folks who choose to express themselves within the music scene.

The idea that Google should buy the Music Biz is ludicrous. Google is not unassailable, and the fate of all tech firms is seriously perilous as the pace of progress marches on. A more likely scenario, in my opinion, is that Google within a few years becomes painfully outmoded, maybe due to the ceaseless rise of Facebook, or possibly even newer tech firms formed around the mobile platform will rise up to steal Googles thunder in coming years. Who would bet against the likely buyer of Google being an old fashioned record/media company?

[DISCLAIMER- I write this article as long-standing and unaligned Indie record label owner. My label has some distro tie-in with EMI in USA and Warners owned ADA in UK but there's no ownership to any Major Record Co.]
Posted by Digby at 12:50 AM 5 comments: