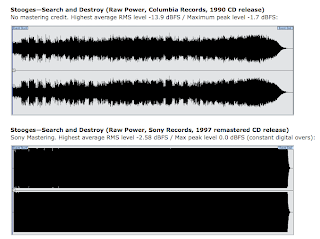 As the Turn Me Up campaign says- if you want it louder, simply turn it up! Remember, the volume knob is in your hands! (ooer).
Posted by Digby at 12:25 AM

My friends (especially my bandmates) will tell you that I complain about the way music sounds nowadays. I always chalked it up to an intangible differences between analog and digital recording processes... I figured that everyone was using the same plugins.

After listening to the Necrophagist and Napalm Death tracks back to back (toward the end of the first video) I'm convinced it's got more to do with the loudness war than digital recording.

Thanks for your thoughts.

I always thought that it was more than coincidence that the arguments over the Loudness War came to public knowledge around the time as illegal downloading. Another example of multi millionaire artists/record companies not giving a shit about the fans.

Also, I find it amusing that Depeche Mode succumbed to the Loudness War around the time that Alan Wilder left.

To do a different mastering job for vinyl and CD makes sense, but why compress the CD master? The CD has WAY more dynamic than vinyl, it was designed to replace vinyl because it outplays vinyl in terms of dynamic range and overall audio quality. It should be the other way round: Compress the vinyl master to prevent that the quieter parts of the music drown in vinyl's basic noise. The CD should contain all of the dynamics available because it simply can do that, and therefore should not be compressed.

I'm very happy that you remaster albums in a proper way contrary to other labels. I named you in a blog post about loudness war ( http://blog.mdosch.de/2013/08/02/lichtblick-im-loudness-lar/ - GERMAN ).
I wanted to leave you a trackback but fucking NSA ehm Google wants me to log in and I'm not willing to subscribe to Google for a trackback.

P.S.
Im a little bit annoyed because I tried ~50 times to send this comment and it was alwas rejected. So I had to use a second browser (hope it will work now).
Maybe you use a lot of third party stuff and cookies to comment and this is all blocked in my main browser. Please consider that some users care for privacy as least as it was revealed that the USA ist surveilling us all...