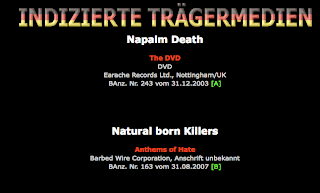 I´ve found something at this german site:

According to their list, is Napalm Death: the dvd censored in germoney and can not be advertised nor sell to minors... Can you tell something about it, why and how does it come, and so on...

Answer: This topic was answered a while back on this blog..heres the story:

Answer: Fora few years Earache had to refrain from selling the DVD by Napalm Death onsale in Germany because the authorities in that country told us its illegal to sell it or even display it. On later editions the offending clip "Breed To Breathe" was removed and the authorities eventually passed the DVD by Napalm Death for sale by allocating an FSK age rating of 16.

The original DVD included a promo clip for the song "Breed to Breathe". The band and the director made this clip is 1997 and if you know Napalm Death's music, they are definately not a gore-type band or a Cannibal Corpse type death/horror metal band, many of their songs have a social or political meaning. The title and lyrics deal with subject of life and death, so the director of the clip made many references to birth, as you can see in the conception footage used throughout the clip. He also highlighted death too, and the clip shows many examples of sudden death and violence.


Meanwhile, to protect the youth of Germany from extreme images, which might cause psychological harm to children, all movies/ DVDs and I think also video games have an age rating system called FSK. A panel of experts sit and actually view the game or DVD, its mostly movies but also Music DVDs, and decide an age rating.The record label is informed of the FSK rating decision, which is final and must be displayed on the packaging, its usually 12, 16 or rarely, 18 if its adult themes.

The higher court ruled that the material is actually so gruesome, and graphic, it is akin to "snuff" parts, so was ruled actually illegal. The 18 rating would not be enough. We were asked to remove the offending scenes and the rest of the clip is actually OK, but we refused as it would compromise the integrity of the original video idea. It was easier all round to remove the song itself from later editions of the DVD disk.

Meanwhile its quite shocking to see this banned products website still has it listed along with many white power Nazi bands and other unsavoury bands. Funny to see also Slayer and Cannibal Corpse also have albums on "the Banned list".
Posted by Digby at 12:17 PM

Hey!
thanks a lot for the fast answer and excuse me for repeating old questions yet answered, I should have googled before posting, I´ll do next time better!
Sincerelly yours