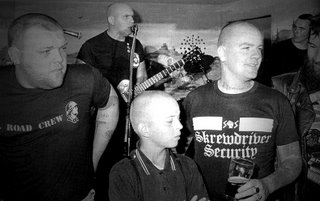 There are some things we cant sign or promote- mostly illegal or in bad taste- mainly because our distributors will not touch it.Any overtly racist or white power band like the ones on Resistance Records or say Skrewdriver from the UK, (pictured above)could never be signed for instance.Notorious Nazi skinhead band Skrewdriver were actually from a town close by Nottingham, Earache's HQ, and their leader and singer Ian Stuart died in the mid-90's in a car crash coming back from a gig,late at night.10 years later a local record collector dude drops by our office to buy tons of Mortiis vinyls, turns out he was the driver of the car that had Ian Stuart in it that night,which he survived of course.Weird huh?
Posted by Digby at 12:00 AM