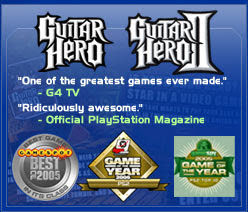 
Answer: Our PS2 game -Earache Extreme Metal Racing -is still the only extreme metal type rock game on the market, and its selling quite well. The initial concept was by the developer- Metro 3D, tho we had a large part in choosing the music (obviously) and some input on vehicles.The publishers of our game are currently porting it to the Nintendo Wii platform for release in approx october, and are also working on an 18+ hardcore blood and gore version, and also trying to work in some support for playing it via the Guitar hero controller in a later version.
Meanwhile Earache is also talking to harmonix (Guitar hero developer) about the inclusion of some of our bands in the next Guitar hero game- called "rock band", where players can choose an instrument, form a band and eventually play together in-game and even online.
Posted by Digby at 12:54 AM

Cool! I would love to play along to some proper heavy bands. I personally would like to play along to bands like The Berzerker and Municipal Waste, but im sure the bands they would pick would be more well known bands.

Keep us up to date with the songs please, and any news on the game that you can "give away". ;-)