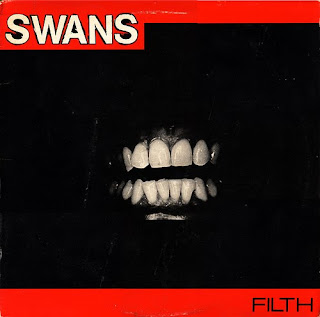 Question: You mentioned in a recent post how Napalm Death used the Repulsion intro of "Stench of Burning Death" in their own "Deceiver" in one of the Peel Sessions. Also, I noticed how the Peel Sessions version of Multinational Corporations is built on top of the riff for Swans' Half Life. I know Shane has mentioned that he was very into Swans' Cop album during this time, so my question is: What other hidden gems among the early Napalm Death catalog are there that play like mini-tributes to other bands/influences? Thanks, Dig! From: info@saddikdeath.com


Answer: Yes well spotted dude! The band did indeed play a few seconds of SWANS 'Half Life' as an intro to their song 'Multinational Corporations' for the recording of a John Peel session. As well as 'Repulsion' intro to 'Deceiver'.

At early Napalm Death shows you could often hear drummer Mick Harris directing the set list to the other members in front of him- he'd be yelling "Lets do Repulsion intro " or "Lets do it with the Swans intro, how chuffed" etc . It was a bit of a trademark, and was to pay homage to bands which influenced them and the intention was to make those bands more widely known to their fanbase. Those two intros had become a standard part of the Napalm Death live set by the time they recorded the Peel sessions. Shane Embury was I think the member who was most into SWANS- he'd wear the T-shirt in photo-shoots to emphasise the point. Per Thunell, singer of early swedish Earache act Filthy Christians wore a Swans shirt on the back of their album aswell.

Napalm Death members were fanatical fans and followers of all music which was extreme and 'out there'- listening to Swans nowadays might not seem like anything much, but in late 80's seeing Swans live was a punishing experience, they always had a super loud on stage set up.Live it was just a constant pummeling with churning, gruelling low- bass tones and stomach-churning sampled passages, plus the tortured moans of vocalist Michael Gira. It was extremely heavy and radical music, thats why Napalm Death members - mostly Mick and Shane- loved it.

The nearest Napalm Death came to doing a full-on slow, churning Swans type effort of their own, was a song called The Curse which appeared on a free 7inch with FETO album. This was a slow Swans-type churning number with heavy samples, i think it was the first time the band had access to a sampler in the studio. A better example is probably 'Internal Animosity' which featured Lee Dorrian on vocals, and might have been one of his last contributions- this song remained unreleased for a long time. The title of the song hints at the troubles within the band- Lee and Bill quit in summer 1989 after a Japanese tour with SOB. The track eventually appeared on a comp CD called Rareache, which -unsuprisingly- is a collection of many of the rare tracks from Earache's vaults.

Napalm Death didn't really do any more blatant covers or tributes in their songs but avid riff-watchers can hear elements of Discharge, Repulsion, Massacre and SOB in much of the Napalm Death material. Little known by fans is just how much of an influence the Japanese sloppy-77-style punkers The Swankys had, especially on drummer Mick Harris. Their cock-sure, stomping punk style was his fave for a quite a while. Swankys members also played in more speedy chaotic HC punk band Gai.

In recent years Napalm Death decided to pay homage to their heroes by recording albums of cover songs which have influenced the band. These have been called "Leaders not Followers" and packed with covers of Seige, Larm, Anti-Cimex etc.

The intro to 'If the Truth be Known' sounds a lot like Jewel Throne!