Why doesn't FUGAZI have a MySpace page? 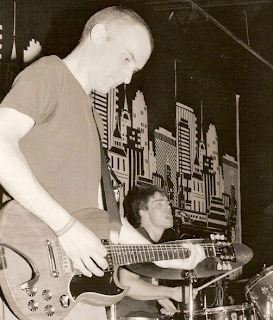 Question: You sort of answered this before but in this interview with ian mackaye http://www.youtube.com/watch?v=V0B-6E3lMHI&feature=related he mentions how when he tried to book a show for the evens he was told that "if your band doesnt have a myspace page you really cant be serious about this". Im curious how long do you think myspace as a site is going to last in regard to being the norm for bands? i mean both dischord records in dc and also tragedy in portland oregon have both made stands against the site. Im wondering as well do you think theres a danger that one site is going to control peoples access to music? From:

Answer: Actually I checked and it seems FUGAZI is indeed on Myspace, and its actually operated off and on, by Ian Mackaye himself, so that's that theory blown. Dischord is on it too but its a fan site, unofficial. The Evens do have one, again unofficially run, but Ian Mackaye approved nontheless.

Dude, there are plenty of bands who are anti-everything and shun all publicity, if you dig deep enough underground, you can find them. I remember a militant 80s anarchist/DIY band that refused to send their tapes in the post to me, because the postal system is "owned by the Government, and we are against Government".Fair play to them for adhering to their strict beliefs- they advised I pick up a cassette in person at a gig, which was usually free and in a squatted venue. I admired their stance, the militancy and steadfastness of their worldview was very appealing at the time. One question nagged me though- how did the band expect the fans to travel to those gigs? By the Government-owned road, subway and rail networks no doubt. The band meant well- but this apparent paradox was lost on them. They were just caught up in this "I'm more punk than you" attitude that was prevalent then.

Myspace is just a free way to have a webpage, the server space alone and ability to stream tracks and interact with 200 million music fans would have cost a band $2000 a month prior to Myspace's launch in 2004.Believe me, running a band website prior to 2004 was a pain in the ass, I know because I ran plenty in the 90s and early 00s. So, millions of bands and fans flocked to the service, because it was easy to set up, and also a ridiculously cheap bargain. MySpace has been so successful that I've argued in previous posts that in many ways it is the face of the entire Music Industry nowadays. Its still the first place I turn to, to listen to a new band I've heard about.MySpace has actually helped launched the careers of dozens of bands in the last 6 years- Emo and Deathcore in particular would'nt have happened without the fan-interactivity and sheer networking power which the site offers.

Even so, many bands exist out there which are anti-anything that is wildly popular. Outsider art is not meant for consumption by the mainstream, pop culture. 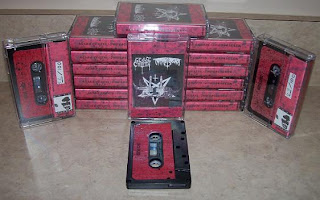 Some of the most 'Troo Kvult' Black Metal bands now shun MySpace completely and only release material on cassette, limited to 100 hand-dubbed copies with hand-drawn art. Imagine that in 2010- no Mp3's! You could be forgiven for imagining that these type of bands are the last of the true renegades, living outside the confines of Society's sheep like hordes.The reality is often more mundane- often its a couple of Bro's living at home in Mom's apartment in Michigan, working a factory job daydreaming that they were in Norway instead, then corpsepainted up on the weekend for the cover photo snap.

My hometown is Nottingham, UK near Sherwood Forest, so I grew up with the folklore of the original outlaw and renegade Robin Hood, its the default attitude round here. Talking out outsiders, when we first signed Mortiis, he actually did live in a shack in the middle of the woods, with no electricty, and no water. we were quite impressed by his tales of having to trek for an hour into the nearest town to use internet and communicate. True story, that.

Heres the Ian Mackaye interview, its worth listening to, he is a fantastic speaker on the subject of Punk and the DIY attitude, with a great story about Wino (The Obsessed):

I'm 99.9% sure that the "ian mackaye" who made the fugazi myspace page is not ian mackaye of fugazi.

I have always admired Ian Mackaye for what he stands for, for what Fugazi stand for, even if it isn't always picture perfect. There's something beautiful about people who (used to) box their own cd's, tour their own asses around the globe, and stick together as a community.

And as long as there's a sincerity in that, one that I feel most of us can detect in the music as well, then the odd MySpace page, even if it is by the real Mackaye does nothing to change that.