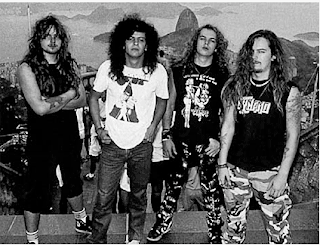 Question: Hi guys I´m reading your blog on regular basis. My question is. Is it true that the place from where is coming the band has big impact on if they get signed or any attention from labels?I know there was a question about big vs small cities bands here already. But I´m speaking internationaly. For example we just recorded EP with well known UK producer (John Mitchell) and recorded it with Roland Grapow BUT we are from far EAST (Slovakia) where is literally no musicbiz. So I´m starting to think if this is one of the disadvantages or reasons why labels are scared to risk sign a band which is basically based in "no scene/no biz territory" compared to west Europe


Answer: Earache as a rule signs bands first and foremost because we like them musically, location is not that important so long as the songs are killer, and the band is willing to travel & tour.
In the 90's we signed bands from Sweden (Entombed) & Poland (Vader) when it was highly unusual to do so, because since almost the beginning of the rock/metal scene there has been an in-built Anglo-American bias. This is mainly due to the fact that the music industry which surrounds the scene is extremely well developed and organised in US & UK. Its been estimated there are over 300 labels just based in New York City, and about 100,000 people in London make their living from the music industry (recording/publishing/concert/touring/venues etc) alone.For some reason, signing bands from our home countries makes them easier to work with, I guess they are just more familiar to those people in the biz.

On the other side of the coin, Earache has also worked with a higher than normal proportion of bands from our home town of Nottingham, UK- its only a smallish town in the midlands of England, but bands like Iron Monkey, Heresy, Fudge Tunnel and Pitch Shifter were all released and promoted by the label. It's almost a requirement of a local label which is doing well to help out its local bands.

Nowadays in the era of home recording and the internet, I don't think it matters too much where a band is based, - we have in recent years worked with bands from Russia (Forest Stream) and Australia (The Berzerker) and we do find that bands from countries with a less developed Biz do need way more career guidance and instruction on how to build a career than US or UK bands. It's not instinctive to them. Sometimes they think being signed is the pinnacle of their career, and stardom will surely follow, when the reality is its just the beginning, the first step on the ladder. Inking a contract instantly raises the stakes and pressure on the band to succeed and this fact mystifies many bands.

The story of Brasil's SEPULTURA is one of the best examples of a metal band coming out of a country with a less developed Music Biz, and by some lucky breaks they broke out of the country to relocate to USA and became huge stars. Roadrunner took a huge chance on that band and deserve all the credit for their incredible insight.
Posted by Digby at 11:35 PM

If location is not really a concern, would the language be one? Would you sign a band with lyrics exclusively in french or german, as an exemple?

You also mention you require bands to tour to get signed. What about investing in non-touring artists who could still sell a huge number of units ala Burzum/Darkthrone/Bathory/Etc... Are you considering those bands/artists or ignoring them right away for this very reason?