Where did the intro samples on CARCASS 'Necroticism' CD come from? [BLOG POST] 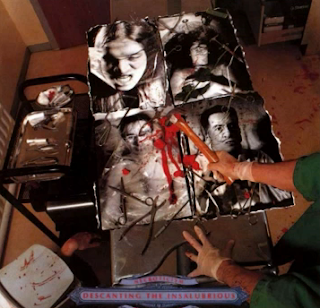 Question: Regarding the intro samples on Carcass -Necroticism Descanting The Insalubrious, how did they come about? Were they just lifted out of TV programmes and films or were they made by Carcass especially for the album?

If they were origiinal samples made for the album, could you give me some information on who did the voiceovers and who did the background noises?

Answer: Yes, the band created their spoken word intro sequences in the studio with the help of producer Colin Richardson, by playing haunting keyboard sounds over spoken word elements lifted off various BBC factual programmes about pathology and death.

You can tell its BBC by the perfectly recorded, perfectly pronounced, posh female voice. The woman speaks English, but its the type of upper-class English only spoken by BBC broadcasters at the time. The vocals were pitch-shifted deeper and double tracked to give them an extra eeriness, and probably to hide their exact origin no doubt too. It might be lifted from a schools program because the female voice is very monotone and quite factual, explaining how deaths are dealt with by the authorities.

When bands want to sample voices and sound effects to add spice to their albums, most often they want to lift material directly from major motion pictures, which is a seriously bad idea and causes too many headaches. Its a huge no-no because obtaining clearance from the major movie houses is a legal nightmare and not even worth the aggro, because they are extremely protective of their material, which is fair enough.

I always recommend bands sample BBC material instead. The BBC is a wonderful institution because it is owned and paid for by the people of the UK, there is nothing else like it in the world. There are no advert breaks on BBC, because the people of the UK each pay about £135 each year in license fees to fund it. The people own it, and so if a band used it for a few seconds of source material, I think its highly unlikely that you'd be sued by the BBC.

Obviously the wholesale lifting of other people's material from any source and claiming it as your own is not really what making music is all about- its all about being creative yourself, not nicking other peoples stuff.
Posted by Digby at 12:23 AM

'Obviously the wholesale lifting of other people's material from any source and claiming it as your own is not really what making music is all about- its all about being creative yourself, not nicking other peoples stuff.'

I take it you're not a fan of DJ Shadow?

DJ Shadow is a perfect example of someone who uses samples purely for his own artistic expression, not to rip off other peoples stuff. he doesn't just rip off other popular music in a way that makes it obvious where his samples come from. his samples come from all over the place and by the time hes turned them into something he'll use in his songs, its impossible to tell what they were originally

My original comment didn't ever appear for some reason.

What do you think of Burial or most golden age hip hop?

Do you think that the relative prominence of a label is a factor? Norma Evangelium Diaboli releases have a lot of probably uncleared samples of monastic chants and Funeral Mist's album Salvation in particular is full of samples from the Seventh Seal. That album is almost eight years old now but no one has sued them over it.

Lastly, I know I've heard more detailed information as to the origins of those samples by way of mouth. I believe the "Prepare to die" monologue is from some documentary interview of a horror director...

Some of the samples on necrotism are from a an episoce of a documentary series called Incredibly strange films. the episode is about gore film pioneer Herschell Gordon Lewis.