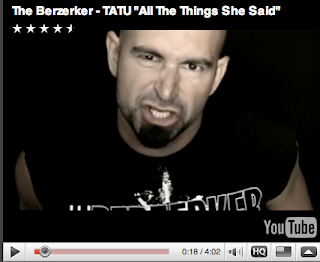 Question: Although they arnt on earache no more what do you think of the berzerker\'s cover of tatu\'s all the things she said? great marketing idea for the band or causing controversy for no reason? Personally i think the video and song as a package is a great bit of press for the band, as far as a bit of a joke goes. From:

Answer: Well we did 4 albums by THE BERZERKER starting in the late 90's, and he was my favourite artist on Earache for a long time, but sadly, record sales had declined alarmingly by the 4th one and the band was in disarray - mainman Luke had no proper band, just a revolving door of on/off members, so his contract was completed at that point, and we declined to offer a new one. Luke took the opportunity to carry on on his own label, selling the CD direct to fans, cutting out the labels/distributors and retailers, which is not a bad idea in theory, but in practise its hard to sell CDs in any great numbers that way.

So I kinda lost interest in what the BERZERKER was up to- also because any kind of techno-ised beats simply sound so 90's and pretty old-fashioned to my ears these days.
So this is the first time i've seen the clip which you can check out HERE

Personally its OK, - the main keyboard riff should start the cover I reckon, as its the most recognisable part.Basically, I applaud the Berzerker for trying to make waves and a bit of controversy never did anyone's rep any harm, but quite simply, its not controversial enough for me. Everyone wants a viral hit which gets 100 Million views on Youtube and embeds itself in everyone's heads. Check out this advert for a Danish Washing machine supplier, then ask yourself which is actually more controversial.
Posted by Digby at 1:22 AM