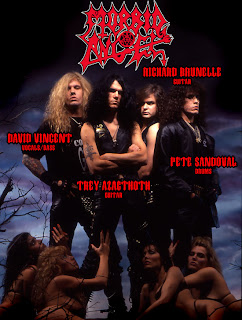 Question: Hey guys, just a follow up to a message I sent in October.
I asked about deluxe editions/special editions of \"Sleep\'s Holy Mountain\" and \"Blessed are The Sick\".
It seems my wishes have been granted - with the Sleep and Morbid Angel albums either out or awaiting release.. so, firstly, thanks for that!
Secondly, I was really pleased with the quality of the packaging and sound on \"S\'s HM\", and thought that the Black Sabbath cover didn\'t break the concise yet powerful groove of the album, so a worthy addition.
Just a few quick \'uns now:
1. Any plans for any more deluxe editions/classic albums in the near future? (Well done on both so far, by the way, though I\'m baffled as to why Wake Up and Smell The Carcass was the only Carcass album not to receive dualdisc treatment.. time issues?)
2. Who do you think are the record label that come closest to you in terms of sheer metalness? (Methinks Relapse)
3. And any plans for getting your hands on the Sleep reunion footage?

Thanks, again.
From Ross, in the home of metal, Birmingham. From: paintyourface@hotmail.co.uk

Answer: HI again Ross, yeah we do read and act on the thoughts of fans who post to this blog- so your request for Sleep and Morbid Angel to get the re-issue treatment was noted.We have plenty of back catalogue titles which deserve a deluxe lavish re-issue, and we really appreciate the thousands of fans like yourself who eagerly snap them up, we assume it's because you see a lot of effort goes into them.We find our bands love to talk about their past. Hey did you get Cathedral "Forest of Equilibrium" yet?- that is stupidly lavish, with poster, 45 minute DVD side, extra 4 track EP.

In the case of Sleep we were shocked to see the band had reformed, so we had to rush release it to co-incide with their gigs at ATP festival and we didn't have time to interview the band plus, sadly we never collected an archive of live footage from the era when the band were recording for us 1992-4.The band left Earache after this one classic album, under a cloud and through legal shenanigans, to persue a Major record deal which quickly went sour for them, and ultimately caused the split up of the act.

As for Morbid Angel- they have only been recording so far in their illustrious career for Earache, and the soon coming Blessed Are The Sick dualdisc is a belter. The DVD has over an hour of interview footage with mainman David Vincent and many of the cast of characters involved in the production of the bands second album.Its an inside look at the bands viewpoint on how they felt at the time being involved in defining the Death Metal genre in the early 90s.You get the guided tour of the legendary Morrisound Studios by Tom Morris (BATS Producer and owner of the Studio which bears his name).People from behind the scenes- management, roadies- even chip in with stories from on the road aswell.

To answer your questions:
1) Carcass interview footage was all used up on the 5 main studio albums.The wake up and Smell re-issue was made because it seemed the odd-one-out and deserved a spruce up, and being packaged with the original Wake UP and Smell DVD (featuring 2 full live shows and all the promo clips) seemed appropriate and common sense.Again it was a suggestion from the readers of this blog actually.

2) Metal Label which is the most Metal? Thats a toughie.Being in the industry we keep tabs on the other labels of our ilk, Century Media, Nuclear Blast, Relapse Candlelight, Victory, Visible Noise- we are rivals, but its little known that we are or were friends from way-back. I have known the owners of those labels personally from even before they started the labels, or as they were starting, because they formed in the wake of the Earache-led extreme-metal explosion.I never knew Metal Blade's Brian Slagel, as he was already operating and Metal Blade were having huge success years before Earache.He formed in the USA, as the labels Roadrunner and SPV were formed in Holland and Germany during the early 80's, which was way before Earache started, so I don't have any kinship with those. Nowadays of course, many of these labels release commercial- sounding Metal bands who post mega- successful sales, blowing Earache's past more modest achievements clean out of the water.To be honest, Relapse's output recently has not impressed me much.It's pretty 'samey'. My Tip of the Hat goes to Century Media, they are the metal powerhouse of this generation.My vote for metal-est label is Visible Noise, they literally transformed the UK metal-landscape in a short space of time, and sales of their biggest acts completely dwarf the rest of us.

3) I dont think we are going after the Sleep reunion show footage, because we dont have any record deal in place at the present, ours dates from 92-94.

heres a video advert for the upcoming Blessed Are The Sick DVD: *there is no actual footage shown as the band wanted it under wraps until retail release:

Earache Reissues In Digipak That will be greatly appreciated (at least by me) :


i didn't mention for re-releases like "Slaughter Of The Soul" and "clandestine" which were from 2006 and onwards. I've yet yo buy Sleep's and the re-release from Iron Monkey!
Gongratulations guys
Great job

I give you full permission to use my picture in front of the Blessed Are the Sick painting that you posted a while back in this reissue.

I know you've only recently put out another "Carnival Bizarre" but are there any plans to give it a digipak edition???

I'd gladly buy it again if it was even half as awesome as the first two Cathedral digipaks... Good work!!!