Pitch Shifter were the Pendulum of the 90's 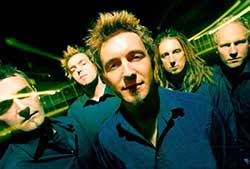 Question: do you think pitchshifter could have been bigger than they were? im wondering as pendulum are sounding mightly similer sure with added empthisis on the dnb elements but alot of the other elements are there. Interestingly pendulum also namedrop the berzerker when describing the more extreme influences on their sound. From:


Answer: There is no mistaking the fact that Pitch Shifter in the 90s were pretty much the same type of 'Rock meets Drum N Bass' type of band as Pendulum are now. Pendulum are extremely huge, having had the good fortune to be picked by The Prodigy to remix them.I saw a bit of Pendulum at Download festival and I actually thought the same thing- this could have been Pitch Shifter a decade beforehand, the similarity is remarkable.

Pitch Shifter's problem, aside from existing a decade too soon, was the beats were more Industrialised, more mechanical, the likes of Prodigy and Pendulum have a more dancefloor groove and beats that kick aswell as swing. PSI was a confrontational, attacking sound which spilled over into the accompanying lyrics and vocals, while Pendulum is a much more laid back groove which is designed to make you dance, its a Pop group actually, Pitch Shifter is a Rock act- there is a world of difference.

I can see a reunited Pitch Shifter, if they are smart, which they are, somehow diluting their sound, adding more dancefloor friendly grooves,adding big-ass quaking basslines, and less harsh vocals, and they could re-emerge on the festival circuit to great acclaim, and huge crowds.It could be a year or two, but the similarity to Pendulum is uncanny.

See the two bands in action for proof:

I know this article is years old, but I've only just found it and still feel a need to comment. Pitchshifter and Pendulum are nothing alike. Pitchshifter were the first metal cross digital band I ever heard and inspired me to join a band, become a programmer and singer. Pendulum make me want to blow up what ever sound system they're being played on. No comparison between the two for me I'm afraid. Pitchshifter are far better then Pendulum, and bigger in their own right. Hoping the new album drops on 2013! Would be amazing to see Pitchshifter live again.