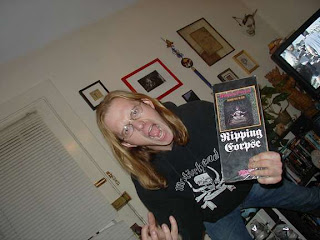 Question: Other than being awesome and two of the bands being canadian. is
there really a link between rammer, toxic holocaust and earache\'s own
cauldron? I heard they shared members once. Im wondering if you guys can
confirm as wikipedia isnt the most reliable source of info. From:

Answer: I've never been to Toronto but there's no denying the city's influence on the worldwide metal scene. Rush is probably the biggest rock band to come from the city, not forgetting the immense Anvil, right up to the modern day HC bands like Career Suicide and Cancer Bats.From afar, it certainly seems to me that the Toronto scene always has something quirky and peculiar about it, it doesn't follow any prevailing American trend, usually it starts its own.

In the underground metal scene, its common for many members of bands to swap around and I think the connection between the bands you mention is drummer Al 'Biddle' Chambers. He was in two of the most influential Toronto bands in recent years, who both sadly split before gaining much international fame. Al wielded the stix in early pre-Cauldron band Goat Horn, who were a stoner-doomy Heavy Metal act, before that he occupied the drum stool for local thrash-speed-crossover merchants Rammer who were amazing aswell.

Earache had our eyes on both of those bands for quite a while, but we didn't offer any record deals at that time. Eventually when Rammer split around 2007 or so, the entire rhythm section decamped to join Joel's Toxic Holocaust which was a smart move for both of them.Meanwhile after Goat Horn split, mainman Jason Decay swiftly assembled Cauldron with the aim to bash out some NWOBHM-inspired Heavy Metal.After hearing the Cauldron debut EP, Earache finally stepped in to sign the band. Cauldron write an amazing tour blog which is well worth checking out for behind the scenes stories, pics and clips of their life on the road.Reading it will crack you up- go
HERE and HERE and HERE.

Another weird Toronto band connection is the big selling Indie-rock band Crystal Castles now have the most recent former Cauldron drummer Chris Rites in their ranks. In fact when Cauldron played London Old Blue Last pub last week with Enforcer, Chris, Alice and Ethan from the Crystal Castles came out to watch and support the band, which I thought was pretty cool!

STOP PRESS: I asked Cauldron mainman to give me more info and here's his explanation of the connection:

When Goat Horn first moved to Toronto in 2001 Rammer was one of the
first bands we hooked up with to do gigs with. Over the years we
became quite good friends with them and when Steelrider left Goat Horn
in February 2006, Al from Rammer offered to fill the drum slot. Al
continued on with me into Cauldron and had also started playing with
Toxic Holocaust at this point. He became very spread thin between the
3 bands and eventually chose to do the Toxic thing full time. Phil
(Rammer bassist) also ended up going to Toxic which ultimately became
the end of Rammer. Al has since quit Toxic and now plays with Toronto
band Diemonds. Cauldron has since had 3 drummers and Al has come back
a couple of time in between to fill in.


Heres RAMMER with "Uprising of Death", I never get tired of this clip, its great!

Heres Cauldron,filmed playing at the famous Toronto Opera House for their official clip "Chained up In Chains"

I would add Goat Horn's legendary video but YouTube makes it a private clip now for some stupid reason.
Posted by Digby at 11:27 PM