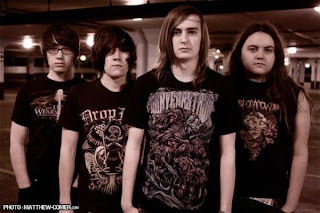 Question: Hi Dig, I've asked and had answered (cheers!) a few questions on here before but im sure you get so much of this these days so if this never gets answered then I'll understand!
I was just wondering if you had the spare time if you would possibly be able to tell us your personal opinion (holding nothing back!) of the 2 songs my band Red XIII has online from our forthcoming debut album, the songs are on our myspace @ http://www.myspace.com/screamredxiii
I thought of doing this when I was reading through old questions answered on here and you had done a somewhat similar thing a few years ago, and personally I would just really like to hear your opinion on our music as someone who is the owner of a reputable record label and has signed and launched some bands that influence us massively!
You can also download the 2 songs for free @ http://rapidshare.com/files/373494418/FREE_SONGS.zip
Thanks for your time! From: redxiiibooking@hotmail.com

Answer: OK if you read this blog on a regular basis, you'll know that probably 75% of the questions I get are from bands searching for a deal, and "just want an opinion".Its drives me nuts. I avoid all such questions because its not a free A&R service.You couldn't resist asking it though could you? Too bad- you think its clever and will get your band into the spotlight, instead you are now in the cross hairs, dude....

I decided to have some fun with your band-thought it might be fun to review you in the style of a big-shot Major label A&R guy, like youtube A&R guy phenomenon Bertie "Big" Balls.In reality his opinion would not be too different from a snotty puerile Lambgoaters one. Hope you enjoy Berties letter!

From the desk of Bertie "Big" Balls:

" Red XIII? What kind of a shit name is that? From Blackpool I see? That's hilarious! Lads- do us all a favour and jump off the famous Blackpool fucking Tower because that's the only way it seems you'll ever get anyones attention.

I checked your twitter feed and it has exactly zero tweets! Are you fucking kidding me? What kind of terminally lazy fuckwits are you? Let me put it this way- fucking Lady Gaga has sold 10 million albums and is the biggest Pop Star on the planet, yet SHE can still be bothered to tweet to her fans on a daily basis. Meanwhile you retards just sit on your arses and expect fans to flock to you. NOT.GONNA.HAPPEN.

Same thing on Youtube- I checked you out, and found 2 clips of your shitty, no-hope band online. Fucking hell, you really are sad bastards- my neighbourhood pets are more famous than you, and one of them is a goldfish. Even my local cat has got more youtube views than you, and it doesn't think the music industry owes it a living.

I bet you boy-geniuses all think you got wicked sick hairstyles, well let me tell you something - fringes went out in 2007, and now its 2010 so stop copying Oli Sykes for gods sake.You look like ponces. I know its hard, but try looking fucking metal for once, get some Possessed and Maiden shirts, buzz it off, or better yet, grow your hair long. To be fair at least drummer Greg doesn't look like an emo faggot. Good on him.

I see you are actually active on Facebonk- the famous 'Social Notworking' site. Congratulations, you and 400 million others now spend hours handing over your personal data to the government for free. Suckers.

Now we get onto the really fun stuff-- the music. You proudly put "Metalcore" as genre, which is so out of date its not even funny. Trouble is- I don't hear any metal- just shitty no talent chug chug riffs. Hey-where are the shredding guitar solos? No solos means no metal. The truth is, you are not a metal band, period.

I don't know why you wasted 10 minutes of my precious time.

OK- I'm out of character now- I repeat the above review is harmless fun,a joke, no harm intended, it's just to liven up the blog a bit. I do hope you got a sense of humour!

Heres Bertie Big Balls himself starring in 'A&R, The Movie'. Its so true!

The band aren't terrible but not great either, I am not a fan of that musical scene, so my opinion is not so well founded. As for the album art I like it, reminds alot of Brutal Truths Sound of the Animal Kingdom. These kids are still young so as you always say practice makes perfection. I am sure the learnt a valuable lessons from this posts

Fuck me this band are shit why did terrorizer waste their time with them. Im going to give james hoare a good talking to.
In all seriousness its like Amy from roadrunner records says in regard to your band getting signed "if you have to ask you'll never know".

To be fair, I asked for an opinion, and though didn't really get an opinion we still got something back from it. I wasn't asking to get signed or for one million pounds, merely an opinion.

If it drives you so mad people constantly asking for your opinions then perhaps you should rethink running a blog dedicated to answering questions and (generally) giving out your voice and opinion hahahah.

But yeah, nonetheless thanks for your time in answering, as they say 'no press is bad press' and people will probably check us out via here, which isnt a bad thing (the songs can be download for free @ rapidshare.com/files/373494418/FREE_SONGS.zip ), its also showed me we should be using Youtube & Twitter (initially created pretty much for the sake of having one) if at all possible! And ALSO it would appear the mentions and links to our page in the blog have been enough to shift our myspace into the first page of results when 'Red XIII' is typed into google, bloody brilliant!!!

As an aside, our artwork was done by Sam Bailey of Ignominious Incarceration fame :D

But yeah, cheers for your time, hope you enjoyed yourself hahahaha

Dig, you shit on them for their hair, T shirts, talentless riffs, etc....but that makes me start to think, why has almost any band been signed in the last 5 years? Think about Suffokate, Suicide Silence, Rose Funeral, Emmure, I Killed The Prom Queen, Carnifex, ABACABB, Winds of Plague....you get the idea here. Just a bunch of shitty "chug chug" riff bands with the same image for the most part. What gives any of them the right to be professional, let alone some make a good living? What happened to originality, talent, you know, music?