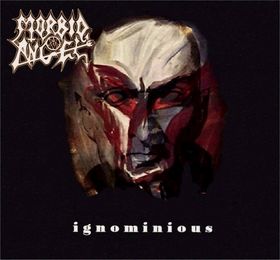 Question: hailz!
after reading one of the following \"ask earache\" segments about entombeds wolverine blues album and why both you and morbid angel parted ways it dawned on me when that a little while ago i saw ane last MA title in your catalog,ignonamos i beleive it was called from recollection,and it was a 2 disc best of in the vein of napalm deaths \'noise for musics sake\',since then ive noticed its been removed,i was just wondering if theres still plans to release this album and/or mosh299 which is just classified as a morbid angel dvd??
(p.s,also i was wondering why the release of carcass\'s choice cut was delayed by 8 years?(due in september \'96 under the name of \"dead,and buried\" i beleive)
anyway,cheers for all especially the almost 20 years of great releases,keep it comin\'!
From: thatweirdlookingguy@hotmail.com

Answer: Fuck- well spotted matey- it annoys the hell out of us and the band- that Morbid Angel fake "i" album is a complete fabrication and has been presumably compiled and released by some enterprising and soon-to-have-their-ass-sued bastard bootlegers. Avoid like the plague..The band and Earache have nothing to do with it.. they even have the audacity to include an Earache logo and give it a mosh number. The bands manager even suspected us of releasing it,cos it looked so convincing, plus, it was very embarrasing, as we were discussing that very same topic with the bands manager at the time but we had firmed up no actual concrete plans.The body of work Morbid have amassed on Earache is vast and we all agree it is begging for a 'best of 2 x CD' compilation at some stage, when band and label are good and ready, but that album IS NOT IT!

The title of the next "i" album by Morbid Angel is a closely guarded secret known only to Trey and presumably, the band.A stand alone Morbid Angel DVD was planned but the band felt it more appropriate to release 1989 era footage with the album it was recorded with, as for ease of royalty accounting purposes, they like to keep the Vincent era separate from the Tucker era - and totally separate from the Browning era-..hence the Dual Disc(CD+DVD on one disc)of Altars of Madness. 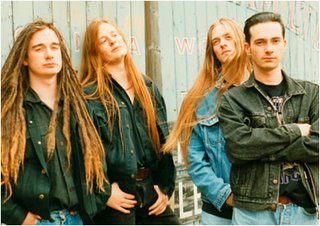 As for Carcass- yes, Earache was working on a simple 1x CD 'best of Carcass' comp in 1998 or so- without the bands involvement, as they had been split up for ages, and the ex-members seemingly had no interest in promoting Carcass any longer..our working title was "Dead and Buried" which made it onto some websites including our own..I think Jeff Walker kindly offered the alternative title 'Choice Cuts', which is much better anyway...so it was due to come out like that and some early "Choice Cuts" promo cds ( we estimate 50 max) were mailed to press...then totally unexpectedly in Feb 1999 drummer Ken Owen suffered a brain hemorrhage while at home, which put him into a coma for 6 months and left him severly disabled. All plans for that album were shelved indefinatley out of respect for Ken's critical health situation, which was the correct thing to do we felt.

5 years later Ken's health had improved somewhat- tho still disabled, he walked into our office, albeit with the aid of a walking stick- to discuss the final release of the long-delayed "Choice Cuts " album.The album was released on May 17 2004 with an extra track which Ken particularly liked. A exclusive interview with Carcass discussing these events can be read here.
Posted by Digby at 11:36 PM