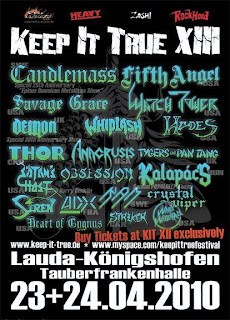 Question: Do you think that the increase in newer nwobhm style bands is connected to Iron Maiden doing record numbers now than during any part of their career? As surely it would make it easier to sell this form of music if the band headlining the major festivals is also of that style? From:


Answer: You might be right, Iron Maiden are enjoying an amazing year, selling more concert tickets than Coldplay, and with their blockbuster movie Flight 666 due out soon aswell, things can only get bigger. After video games like Guitar Hero and Rock Band, I agree, the resurgence of all things 'Traditional Heavy Metal' can be attributed to Iron Maiden's ongoing success.

Meanwhile the 'scene'- such as it is - of young NWOBHM-influenced bands is very tiny indeed. We discovered it by accident almost, hanging out with our new crop of Thrash bands. At an ENFORCER gig in Birmingham we found out that the bands themselves and also their young fans are not so much into the currently highly popular and prevailing Death Metal and Black Metal scenes. They simply are not listening to say, Mastodon or Lacuna Coil, nor Darkthrone or Morbid Angel or Dillinger Escape Plan. These young bands turn out to be more influenced by the classic timeless HM sounds of Iron Maiden or Judas Priest, Raven, Tygers of Pan Tang.It was an exciting discovery for us.

Earache tried to showcase this new scene (Traditional Heavy Metal or NWOTHM) on our HEAVY METAL KILLERS compilation. It was a tough task to do it, because bands of that ilk are so far below most of the metal scene's radar, they are positively subterranean.ENFORCER, CROWNING GLORY, RAM and our own signed CAULDRON, WHITE WIZZARD and POWERVICE all feature on the comp.

Power metal bands like Hammerfall or Primal Fear have been huge in Europe for a decade, both are praised for singlehandedly keeping the true HM flag flying during the dark days.However, these new NWOBHM bands are distinctly different from their Power metal predecessors.NWOTHM means a return to no-frills, song-based, basic true-to-the roots HM. The focal point shifted away from the riff (See the Sabbath/Doom scene for that) and back onto the singer, and the song. Most tellingly, there are no 20-piece orchestras making an appearance or histrionic lengthy solos, and no glam-rock affectations. The NWOTHM bands appear almost 'punky' and down-to-earth in outlook actually, which is what we like about them most in fact.

Watch WHITE WIZZARD explain it themselves:

Thanks dig, thing is for me cauldron sound like one of those what if situations the one they answer is what if paul dianno had joined raven after getting the boot from maiden, its the raspyness in decay's vocals that make me think that.