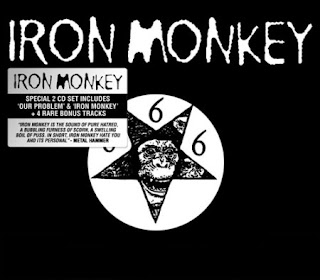 Question: I\'ve just bought the new Iron Monkey two CD set, stuck it in my CD player, and it turns out the cds are the wrong way round. On the disc that is labelled as the S/T album, it has Our Problem on it and vice versa. I was wondering if this may be another one of those \'rare\' Earache mistake pressings that Might be worth loads in a few years? From: redear16@hotmail.com


Answer: Yes its a printing mistake at the plant.The entire musical output of the legendary Nottingham HC/ sludge/doom band is now back in print after probably being out of stock for like 9 years.The bands 2 albums, plus various extra songs are now re-issued across 2x CDs as a lo price pack.The first album was produced by an up-and coming local lad and wanna-be producer, called Andy Sneap.As you rightly point out- yeah the on-body information is swapped- one disc gives the info for the other, and vice versa.

I dunno if they are rare- all i know is- the curse of Iron Monkey has struck again!

Iron Monkey were going from 1994-1999 and were a HC band which were hands-down one of the heaviest bands ever to stalk a stage.The rhythm-section of Justin Greaves and Doug Dalziel locked into some of the biggest, most bad-ass grooves, while front man Johnny Morrow -off stage, an easy-going fella, but would turn into a wildman to cause havoc at every gig - you dare not take your eyes off him for a second in case he launched a front stage monitor wedge into the crowd or dived off the PA stack. Iron Monkey shows were some of the heaviest and most violent ever in the UK in late 90's.

Sadly JP Morrow passed away in his sleep in 2002, only his closest friends knew he had a kidney defect from birth, which had affected him for all his tragically short life.

Heres their only official video clip.The ECW was Extreme Championship Wrestling, which was an underground sport at the time, IM bassist Doug was a fanatic.We got in touch with the ECW folks and they kindly handed over all their prime footage for us to edit into a music video.Like Iron Monkey- ECW was heavy, violent and a little bit absurd.

These releases would be perfect for Earaches "First Time On Vinyl" series. Any chance of that happening?