Breaking out of Ireland? 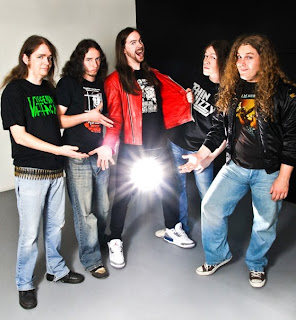 Question: As you know the Irish metal scene has never been the strongest. But when you listen to bands like Gama Bomb and Primordial and see how they're getting on you always have to believe that there is hope. So I guess my question is simple, if the band is good and the music is tight and you're gigging regularly how do you get noticed by a label such as Earache, or any label for that matter!? Is it that Ireland is ignored because of the small scene? or is the that we are isolated from the UK and America? Sometimes sending your demo to everybody you know and gigging in every venue you can think of isn't enough so what do you do if you want to make music your life? From: psykosisband@gmail.ie


Answer: I suppose the short, extremely glib answer is - move, dude. Get down the Dublin ferry terminal and hit the waves to Holyhead- a car is only Euro 79 and takes 90 minutes. I wouldn't say Gama Bomb have exactly 'made it' out of Ireland just yet, to us they are still a relatively new band, even if top fashion models can now be seen moshing at Gama Bomb gigs.They travel bloody everywhere- in fact, they are on UK and European tour right now, supporting the new studio album- grab the free download from http://www.earache.com/gamabomb by the way.I'm meeting them in a bit, as they play my hometown Nottingham tonight. I told you they get everywhere.

The thing about Gama Bomb is- they are seasoned travellers.Also being the friendliest of characters and having an encyclopedic knowledge of thrash gains them fans and friends everywhere they go.Even before they were signed to this label, the band were such regulars on that Dublin-Holyhead ferry, they might as well have named it after them.It impressed us no end that they were endlessly visible in the UK scene, playing Thrash Assault in Huddersfield and various small-scale, even tiny, gigs back in 2006-7 when the new wave of Thrash was still way under the radar of most of the metallic hordes.

Even after they were signed, Gama Bomb undertook their first proper-ish Uk tour by- get this- public transport. I kid you not.In all my career, I've never known any other signed band do this.For some reason they could'nt suss a van or driver so after every show they would stay at friends houses, then get up early to walk to the bus station or train station for the next gig.While carrying all their gear.

Endlessly playing your home town to the same faces is not how you build a buzz around your band.I've said it many times on this blog- you simply have to hit the road.Doing mini-tour swaps of like 4-5-6 gigs with local bands from far away is a good tactic, but to organise this stuff you have to network and communicate with like-minded bands from say UK or even EU.Further tips are explained in Martin Atkin's essential book for bands new to the touring circuit- Tour:Smart, its crammed with tips, written by the drummer of Public Image, Minstry & Nine Inch Nails.

If you need further proof heres a quote taken from the Pink Floyd Wikipedia: "Pink Floyd (the definite article was dropped at some point in 1967)[36] replaced their ageing Bedford van with a Ford Transit,[37] and used it to travel to over two hundred gigs in 1967 (a ten-fold increase on the previous year)".

Pink Floyd performed 200 gigs during 1967.Pink Floyd are the biggest selling rock band of all time.I guess it worked for them.