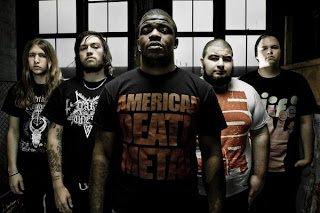 I was surprised based on the history of your releases, and also the tastes that you guys express throughout this blog, to also find that you have such high regard for deathcore.

When considering deathcore, I always find myself coming back to one issue - in striving to be "brutal" (yeah, I hate using that word)it seems to me that a lot of these bands have forgotten the most important element, feeling.

The Red Shore for example, who you have mentioned in a positive light previously, and who are certainly a solid live band, seem to suffer from a very common symptom of deathcore: ridiculously over triggered drums, and just generally compressed production, to the point where their recordings have absolutely no dynamics, and no feeling.

I think that's where a lot of the appeal comes from in early grind. You listen to bands like Carcass, and it's incredibly heavy, but also organic which lends it a certain sort of mojo. It possesses a certain level of honesty and real-ness that I feel is missing in deathcore.

What do you think about that? It seems to encompass a lot of issues including digital vs analogue recording and the like, but I suppose the main question is, at what point do triggered blast beats become so robotic that they lose their relevance, and in striving for "brutality" have a lot of these bands missed the point?

I mean no disrespect to these bands or people who love their music. And I love the blog, cheers! From: flytogothenburg@live.com.au


Answer: I've signed a fair few Death metal bands over the years, and yes, I don't see what all the fuss is about Deathcore- to me, its just the new generation of kids' take on DM, they are adding a whole bunch of Hardcore influences, I don't have a problem with it at all. To be honest most of the debate is just the older DM crowd bashing and ragging on the much younger, teenage deathcore guys.The arguements rage across the internet, occasionally it might get as silly as you can't play Dm with a fringe or bald head- only DM played by long hairs is real DM. That's absurd of course (unless its Ripping Corpse ha ha)

To be honest, Deathcore does actually sounds fresh to my ears,its like an injection of new ideas and innovations- I did Morbid Angel and Carcass etc 20 years ago but I'm not a nostalgic person, they were the originators and lay down the blueprints for what is heavy and deathy in metal, but it doesn't mean DM always has to sound like that forever.

But time moves on, and I'm pretty sure it is old school DM band Suffocation which somehow became the major influence and blueprint for Deathcore- who knew? Suffocation exhuded sheer brutality, they were the first to play DM styled breakdowns (taken from the HC scene, like Hatebreed) galore, and had arguably, the most brutal vokills in the scene.

As for the productions on the albums, I take your point- all of the early 90s bands recorded analogue, there was no digital recording programs on laptops back then. Technology also moves on, and recording digitally makes common sense for all newer bands, its probably a quarter of the cost of analogue studios, if you can find any left.

I think part of the problem is Deathcore is a catch all term for say the likes of Annotations of an Autopsy, Acacia Strain, Oceano but also includes bands like Bring Me The Horizon and Red Shore.There is a world of difference between those bands, to my ears the first 3 are pure brutal Deathcore, while the last 2 bands have other influences besides pure Death Metal- ie Swedish Gothenburg DM and plenty of HC are in the mix on their albums.Still heavy and relenting but slightly less brutal. 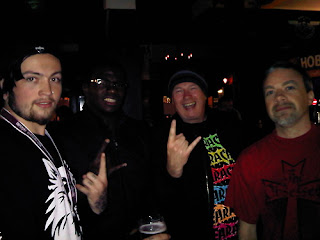 Oceano just played in London and destroyed the place, the power coming off stage was simply incredible, its one of the heaviest gigs I've ever seen.We had a few beers with the guys after the show- Pictured L--R is Jeremy & Adam of Oceano with myself (Dig) & Dan, the Earache label manager.

If you want to know who Earache considers the kings of brutality right now- its Oceano, see A Mandatory Sacrifice clip :

I actually see deathcore as a genre that came from death grind simply by the bands that the people in the scene name as an influence eg cattle decapitation, dying fetus, misery index etc, for me the genre is a combo of death grind and the nyc style of slam death metal that suffocation practice.

I can see where the previous poster is coming from, I just saw Suffocation last night for the first time, and those breakdowns get payed tribute in a swathe of my local bands, I'll tell you what. I use to have a fair amount of scorn for deathcore acts, this has definitely opened my eyes a lot to what the genre as a whole is striving for, at the least!

im being completely serious when i say that 95% of "deathcore" has NOTHING to do with real death metal or hardcore,its just kiddy music. its immature and an extension of the emo/
"scene" thing,which is basically just an extension of mall punk like afi and green day. deathcore,the kind popular with kids with sideways hairstyles,is pathetic

I agree with you completely on that, after the popularity of these bands fade out record labels and kids alike will find something new to eat up, no disrespect to the bands but when i hear the music it just sound like they took the heavy aspect from death metal and the lyrics of metalcore. no offense to anyone who's an actual fan, but i just find it very hard to take this genre seriously

The thing is, people are always comparing deathcore to "old school" death metal. If you're going to compare it to anything compare it to "modern" death metal since they're paralleled in the same timeline. If you'll notice it still comes in the same main sub-genres that real death comes in, i.e. brutal, melodic, tech, progressive. The only difference is the actual quality of the music. They both use blast beats, breakdowns, tremolo, gothenburg riffs(if melodic) etc etc. Except deathcore tends to be more groove driven with it's excessive breakdowns and chugs, and sometimes lack of solos, while death metal tends to be more technical and more atmospheric, providing a sense of dread, anger or malevolence(though not like the old school. I mean I really can't agree with the statement that they've done something original by adding hardcore elements. Death metal has had hardcore elements for a long time, including breakdowns, but adding a shitton of something that was already there (like breakdowns) and removing something pivotal (like solos) is hardly what I would call an innovation. Also, one thing that is replete throughout the genre is a lackluster performance of the vocalists. It's just not taken seriously by the constituents of the genre. Again, that may be something new, but not an innovation.