Who did Terrorizer art? 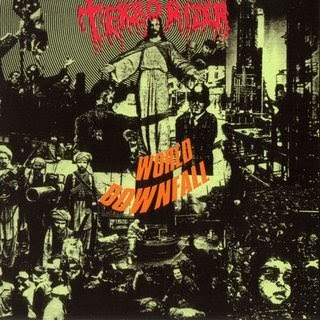 Answer: It was Earache's earliest staffer- dude called Martin Nesbitt, who worked with me from 87-90, this was when Earache still operated out of my apartment.We wanted a typical scum/feto political type b/w collage, but instead of hiring an outside artist, it seemed easier - and cheaper- if Earache made it inhouse.Martin was handy with scissors, ye olde Pritt stick and Letraset(if you're under 20,look it up) plus he had an eye for design, so he cut and pasted by hand old newspapers and various newsworthy pictures of the time, to create the sleeve.The cover has become quite iconic itself over time.
Posted by Digby at 11:42 PM