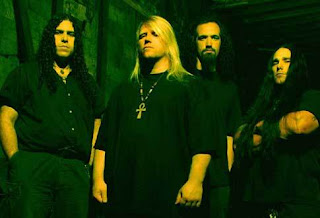 Question: I couldnt help but noticing in your bands you nearly signed question you had a file marked "Nile". As a massive Nile fan with the ink to prove it im wondering what era of nile this was. would have it have been after their first label Anubis Records went out of business or would it have been after they departed relapse records? From:

Answer: Earache became aware of Nile quite early, the band were serious fans of, and protégés of Morbid Angel, and as Earache had released all Morbid Angel's output up to that point, we thought they would be a great band to work with. Plus, we liked their take on Death Metal with the Egyptian themes to the fore and considered them a leading upcoming DM band.

Additionally, the highly experienced management of Morbid Angel were involved in helping out Niles career aswell, so we had a connection that way.Earache thought it would be a simple matter to pick up the band. We were wrong. 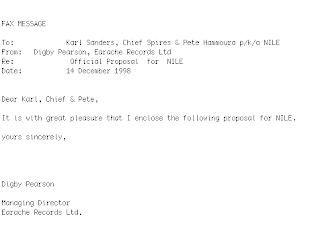 Our offer to Nile was made in 1998, and the band chose to sign officially to Relapse who had, from memory, already released the bands debut on a one-off basis, I think?

Looking back, our monetary offer (advance) was low - our thinking was that the band would jump at the chance to be on the same label as Morbid Angel.Unknown to us, it was also the management policy to spread their bands around all the bigger metal labels, as having all their eggs in one basket is not an ideal scenario if anything goes wrong.Ironically, this 1998 era was when journalists and some fans were accusing Earache of turning its back on the Death Metal scene, so signing Nile would have made a nonsense of that arguement.

Seems Nile made a good choice anyway, as the band had an amazing run of success on Relapse.However,that deal ran its course and the newest album For Whom The Gods Detest was released last week on Nuclear Blast.

Earache is well used to not getting to work with the bands we want, our list of bands who we had shown interest in, but didn't sign, would extend to hundreds over the years.

Bands, or those who control the bands affairs (managers/agents) are in the ascendancy these days, they call the shots about the length and type of record deal they are willing to commit to.Most bands also weigh up the option of going it alone on their own label- using the internet as distributor- these days too.

Many weigh up the pros and cons and still decide to sign traditional record deals, which nowadays include Publishing and Merchandising options, and even live income options- these are known as 360 deals in biz-speak, and came about because of the declining (some say terminal) CD sales.

Labels now spread the risk of the heavy financial investment in a band, by negotiating some slice of the income from other, more lucrative areas,ones that cant be file-shared (yet), like song publishing and merch, which once were considered off limits.

Even highly ambitious bands can be scared off the DIY route by the practicalities of financing their recording, and all the expensive marketing that is required to promote the record it seems.

That's why labels still exist- because banks have a habit of saying "no".

It takes an eye-watering amount of money to release a physical CD or LP release into the global record marketplace, and for it not to dissappear without trace.
Posted by Digby at 10:56 PM