Why not Nausea on Earache? 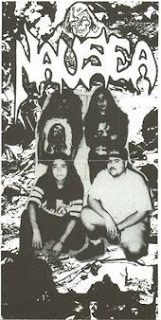 Question: How come Earache never signed NAUSEA from L.A.? They were pioneers in the early Grindcore scene in California along with Terrorizer.. and had connections with Morbid Angel, Napalm Death etc

Just wanted to know your thoughts. From: the_suttonator@hotmail.com


Answer: Short answer is - in my opinion Nausea were not grindcore, they played political mid-paced HC punk, now more commonly known as crust-punk.They had no insane drum speeds or metallised riffs, so it was pretty much how anarcho-punk bands had always sounded during the 80s, but with slightly more growley vocals.The exact same accusation could also be levelled at Extreme Noise Terror in UK actually, and Earache didnt work with them until much later. Nausea were not leading anything new, even at the time, they seemed destined to be a footnote, despite you calling them pioneers, they were around at the time for sure, but that alone does'nt make them pioneering.

Apart from the music, the band were also somewhat sketchy in their line-ups, back then, they seemed incredibly mysterious,and prefered to run with their own crowd in LA most of the time. Nausea seemed to lack ambition, they weren't avid tape traders or letter writers which marked you down as a grindcore-nut at the time. Seems they had other options so being a pro-musician wasn't the be-all and end-all. Even when Nausea singer Oscar Garcia was roped in for the Terrorizer recording session, it seemingly made little impression on him.

Its true that Terrorizer actually made an album which helped define what grindcore was all about, and Oscar was indeed the singer, but World Downfall was made as an afterthought,as Terrorizer had already split up by that time.

In many ways the demise of Terrorizer was because members Jesse and Pete relocated to Birmingham, UK and Tampa, FL to play with Napalm Death and Morbid Angel respectively. They were poached with promises of a real career, which is how it turned out. Meanwhile Oscar remained in LA, he always was first and foremost in Nausea anyway.

I have a vague recollection that Nausea did get an album out eventually on local LA label Punk/Metal/ record store outfit Wild Rags, but it did'nt do much.

Looking for information online is hard nowadays-Luckily the band has a myspace but some idiot removed their wikipedia entry, citing not prominent enough band. Thats annoying because lesser bands than Nausea LA have a wiki.Oh well, I guess all those years of being mysterious has now backfired.

I turned up an Oscar interview online where he mentions my lack of interest. The interviewer Se@n's smart-ass comments about me are pretty wide of the mark, and unhelpful. Nowadays Sean does Damaging Noise blog.

Lastly- a warning about the "other" Nausea. Do not confuse LA Nausea with NYC Nausea who had a similar logo but were around a while earlier during early 80s as a political HC band, influenced by Crass.They were absolutely nothing to do with grind.

I agree, don't confuse the LA Nausea with the NY Nausea...the latter absolutely destroys the former both sonically and historically. Also, Crass may have been a Lyrical influence but the NY Nausea was more musically influenced by Discharge, Amebix, Voivod, Black Sabbath, and Pink Floyd!

From what I know nausea LA was never interested in earache records in the first place...Earache brought us Grindcore Back in the 80's with maybe 3 or 4 Good bands, so it wasnt like a deal of the century thing to be on that lable like it's been mentioned on this blog now PeaceVille records was a major interest on their mind's but with the punk attitude they had the band focused on making music,drinking and having a good time,still even now it appears the same without an interest of the comercial material world,theres a good underground following they still carry,and the mysterious back fire thing dont make sence to any nausea Fan it is just different side's of the world that's all one is the comercial $$ $ide the other is just a dont care side of the ussual strugles of life,It's like ExNxT / DOOM and napalm death for example 3 bands from the U.K living in 2 different worlds with 2 different messages with 2 different ambitions for 2 different kinds of people and listeners the Punk mentality will never die.. NYC nausea totaly different strokes for diferent folks they do what they do well let me say they did once I dont beleive they are active no more , Los angeles Nausea is still standing tall with their opinions,estate of mind ,and ambitions in life and not really Impressed with "Real Career's"??in the music buisness there is no such thing , also about the not been pioneer's ?humm??let see Nausea was who brought you ,After world ,need to live,corporation pullin.. just to name a few of songs that where used to complete the Terrorizer album do to lack of songs..and well I can go On and on behind the mistery of NAUSEA LA,but I should stop here --I am just a huge Nausea LA Fan and follower since 1987.


I hope they make the new record soon!