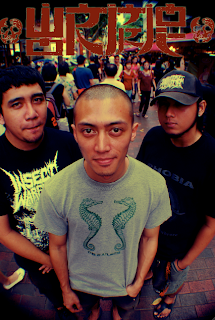 Question: Congrats on signing Wormrot, they are now my fave band. Are Earache getting back into grind, and will you be signing more such grindcore from Far East countries? From: davegrindtilldeath@gmail.com

Answer: Yes, glad you like them- WORMROT is hands down the most exciting grindcore band in the scene at the moment. First time I heard them it was one of those extremely rare "Aaaaargh" moments, the band had that scarce commodity of being extremely fast but controlled and tight in the execution of the songs.Also they had an extra energy and zip to the playing which raises them way above the average grind band, in my opinion.

Earache had a lot to do with the birth of the grindcore genre, I was there in the studio during the recording of Scum, Reek, FETO, Extreme Conditions, and many more of what are now referred to as the classics of the genre.Those bands were'nt playing grind to forge a career, or be ironic, the intention was to bury the torpid Rock and Indie scenes in an avalanche of noise. My role was mostly sitting in the control booth, urging the bands to "play it heavier", "try it faster","make it noisier" etc.That, and write the cheque at the end of the session to secure the tapes.

Having been involved in the blueprints for the defining albums of the genre, it sort of had the unwanted effect of clouding my judgement of the pack of bands following in their wake. For many years, nothing much grabbed me. To my mind, hardly any new bands have that sense of purpose or urgency that the originals had. Too many bands nowadays pick up instruments and play grindcore as a career-choice - playing identikit noise is perfect fodder for the unskilled musician, I'm sure technological plug ins and presets must exist to help budding grinders get that 'grind" sound nowadays. Everyone has the sound, but no one has the "feeling'.

The best grind bands teeter on the ragged edge of the envelope- walking the line between uncontrolled chaos and precision attack- its very tough to pull this off, but Wormrot do it spectacularly, in my opinion, as Insect Warfare did before.

In actual fact, the first time I heard the band was from a 2009 downloadable sampler album made available courtesy of one of my fave blogs,Invisible Oranges. It was the xmas break and I needed a fix of new stuff to listen to, so grabbed the free sampler loaded it into Itunes, and proceeded to crank it. Mostly it was uninteresting, and I was at the point of turning it off, until the second-to-last song ( iTunes was playing in alphabetical order somehow) by Wormrot ripped through the air. Fucking hell, they were epic, the song "Born Stupid" was a killer. Wormrot gave me the same kind of feeling as Insect Warfare, by whom we had released the 'World Extermination' opus earlier in 2009, and had subsequently arranged a farewell UK tour for the band aswell.

A few days later - between Xmas and New year, I became aware that the sampler was compiled by a fella named Andrew Childers at Grind and Punishment blog, so turned to his blog for more information. He had just blogged his top 10 of the year, and Wormrot sat proudly atop his grindcore 2009 chart. This spurred me to download the album from mediafire and investigate them properly.

[NOTE: It tickles some bloggers that a Record label boss doesn't have any qualms about admitting to 'illegally downloading' an album. As it happens my company paid hard cash and bought the copyrights to the album from the band & label Scrotum Jus a month later - so I don't feel too bad about it really, and neither do they. Its a tricky subject, but I didn't file share or upload the album, which is quite a different proposition, legally speaking. Plus Earache left the original file where it was - meaning anyone can still grab it for FREE if you want it.]

Anyway, back to the story. It was a revelation to find out the band were from Singapore, and an even greater one to find that every single song on the Singapore-only released debut CD "Abuse" was amazing, there were no filler tracks at all. Having the audacity to play a Yeah Yeah Yeahs cover marked them down as not afraid to defy convention. I emailed the band same day to make contact.

Luckily the band and label got on great right away, they were impressed by our grind credentials,while we were impressed by their ambition, hard work ethic, and willingness to put Singapore and Asian grindcore in the global map.

In record time- about 2 weeks- a deal had been struck to sign the band. The plan is to re-issue the Abuse CD with bonuses, and then more albums to follow. The band will embark on a worldwide touring trek to promote it.It's a fair bet if you are a fan of grind, WORMROT will play near you in 2010, so come out and support the best new band in grindcore!!
Posted by Digby at 2:26 AM

I can't say how weird it was hearing that Earache was about to sign Wormrot as it seemed so totally out of leftfield that I thought someone was having a joke.
Previously my faith in Earache had been somewhat shaken by a wealth of slightly dubious signings, but the legacy and indeed power of the label is still as big as ever so the fact they've gone out and signed a damn hardworking band from as relatively obscure a place as Singapore just makes me glad not only for the band and the support they'll get from one of the biggest players in the game but also that Earache's still got all it's teeth (if you get the metaphor).
Here's to hopefully a positive and hopefully long-lasting pairing!

i'd seen wormrot heralded as the best new grind band since IW but didnt pay any attention, might have to check em out now.

i agree on the "feeling" or lack there of in recent grind and while i'm sure you get this all the time i'd recommend checking out RED from Osaka Japan.so far they only have a CD/EP called "golden oath of allegiance" on devour records but it blew me away with its aaaaarrgghhhh factor and has those ridiculously catchy high-speed mosh riffs napalm specialized in.

the bands myspace address is:
www.myspace.com/redgrindosaka
they have 3 songs up which is what prompted me to track down the ep.

i imagine you get recommended stuff all the time but i think
RED are a grind band to definity check out.plus they have a earache homage of sorts on the face of the cd "mass outbreak of human error world starts downfall" haha.

Check out The Leviathan's Mandible,out of richmond,va. unfortunately these dudes don't have the best sounding recording but they put on a great show live and really live and breath grind. good dudes too