Decapitated's decision to carry on is perfectly understandable. 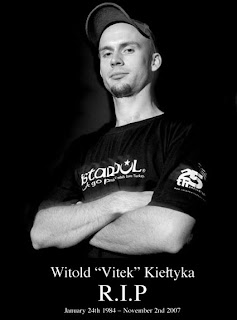 Question: I was wondering what you think about Vogg's decision to carry on with Decapitated after the death of his brother Vitek, recruiting an entirely new lineup in the process.
Are the band still contracted to Earache? If a new album is in the works, will you be releasing it? Prior to the accident, the band were undoubtedly a leading force in death metal in recent years. Do you think the quality and spirit of Decapitated can be upheld with just one remaining original member? From: jaymz__allen@hotmail.com


Answer: Personally, I think it is perfectly reasonable for Vogg to recruit new members and carry on with his band in 2009, after the tragic death of his brother/drummer Vitek and the fact that singer Covan is still slowly recovering from major head trauma sustained in Decapitated's horrific tour bus crash while on tour in November 2007.

Your question almost presumes that the band lost all the members through normal circumstances, be it musical differences or whatever, when in fact Decapitated suffered a tragic accident which decimated the band.The circumstances behind the new line up are not trivial. Undoubtedly, Vogg's motivation is 100% pure and contains an element of "carrying on" in the face of adversity. The new line up of Decapitated is also a way to pay tribute to the fallen Vitek, and recovering Covan.

Decapitated lost a member before -in 2005 original vocalist Sauron chose to quit Decapitated to persue other musical interests -he formed a punky/jokey/goregrind band. Covan was quickly recruited as Sauron's replacement and the band carried on.

A quick history lesson: Earache/Wicked World signed the band in 1999 and recorded 4 albums by Decapitated from 1999-2006, during which time we are proud to say the band went from teenage Polish newbies to one of the world leaders of the technical Death metal scene.By summer 2007 the band had reached the end of their contract with us, and despite our best efforts to re-sign the band, they and the management chose to ink instead with European powerhouse Nuclear Blast.

So from the summer of 2007 onwards, the signing of the bands lucrative new deal with Nuclear Blast meant we became quite estranged from Decapitated, through no fault of our own, and we certainly weren't involved in any of their career plans from that point on. One consequence of the Nuclear Blast signing was that original bassist Martin suddenly quit the group and relocated to a new life in California. Martin was not present on the tour bus during the accident.

When the tragedy struck, it was deep into Eastern Europe in Belarus near the small town of Gomel, the tour bus was taking the band to that nights concert when it crashed head on at speed into a lorry heavily laden with lumber. The bus was completely destroyed, members of support band Crionics also suffered many broken bones, yet by sheer fate Decapitated guitarist Vogg escaped with pretty minor injuries. News took a few days to filter back to us, so we held an ebay auction to donate money to the emergency Vitek fund. Vitek passed away a couple of days after the crash and Covan was for a long while in a coma.

In the couple of years since the accident, Vogg helped out on the road with fellow Poles Vader and was also, we hear, offered the rhythm guitarist job in Morbid Angel, which he turned down.

If Vogg/Decapitated does decide to record any new material it will be for Nuclear Blast, and even if its brand new line up, I for one would applaud such a move, as it would prove that the band's spirit can triumph over tragic circumstances.

I find it interesting that sauron and decapitated's current bassist are both in the death metal super group Masachist together. along with members of yattering and ex members of dimmu borgir

Thanks for the answer dude,theres no doubt Voggs motivation is pure, sorry if my question sounded negative or cynical as it wasn't meant to be at all. I was just curious of Earaches opinion as a long time label of the band.

Saw em live recently and they were as good as ever, and look forward to whatever Vogg has up his sleeve, the dude seriously knows his way round the fretboard!