Enmity between Napalm Death & Fudge Tunnel back in the day? 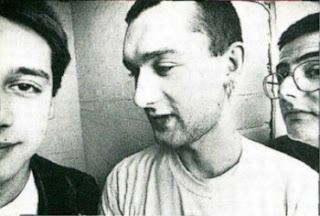 Question: Dig, Your probably could have guessed this was coming since the latest issue of terrorizer went to press. Alex Newport said and due to the controversial nature of the quote i will write it in full " We were never really part of that grindcore scene, I remember Napalm Death asking earache to drop us, saying that if the didnt they'd leave, they were offended because we werent a "true metal" band, We're like yeah we arnt a metal band at all you brummie dipshits!" Im curious is this true? as they are quite serious accusations im wondering if you could clear the story up a bit of what went on. From:

Answer: Yeah I read that feature on Fudge Tunnel's 'Creep Diets' album and the most suprising thing to me is that Terrorizer featured Fudge Tunnel at all, because the band's music has not really aged that well, the only mentions I get are from readers of this blog, we never get asked for their CDs from retailers for instance.

Terrorizer, as per usual, went digging for dirt by asking their standard leading question which all our old bands get asked: "How horrible was it for you, being on Earache back in the day?" or some such nonsense, so it was pretty refreshing to read Alex Newport actually give an honest, even-handed, you could call it mature, appraisal for once. Alex speaks frankly about the bands woes, and blames the bands own shortcomings as the reason for their split.

Back to the question- one thing the feature does highlight is that not all the Earache bands back in the day were one big happy grindcore/death metal family. Far from it, there were rivalries and factions, outbreaks of double dealing and clashes going on all over the place, which for the most part have remained unreported, despite the couple of books and numerous magazine articles written about the early extreme music scene,the real cloak-and-dagger stuff remains untold.

I could tell you stuff that would make your hair curl - examples of hypocrisy, dirty tricks, and underhand dealings which would shatter most fans' long held beliefs about some of the leading grindcore bands. Stuff they've done which quite simply mocks their own lyrics and contradicts their pronouncements to the press, and undermines the lofty banner under which some of the bands ply their trade.

It's not in my interest to expose any band because most of their back catalogue remains on Earache, and to do so would be pretty dumb of me. Anyway its mostly just examples of human frailty, or ego-driven ambition - common stuff which can and does affect anyone,really.

Earache became involved with Fudge Tunnel because of a few lucky events. Earache's in-house art guy Johnny Barry became Label Manager, and his personal tastes were far from the Death Metal/Grindcore the label was known for. Johnny had been in a local Hardcore band called Filler, and so his network of contacts were definately more on the hardcore side than metal. Johnny was - and still is I think- Fugazi's UK booking agent.

Johnny steered Earache in a more HC direction for a while. His best buddies in the local Nottingham scene were an up and coming trio called Fudge Tunnel who were making serious waves whenever they played in London with the then-very-hip Sub-Pop/ Amp-Rep scenesters. The band had a 7inch out on the Pigboy label, which was operated from above the legendary Portobello Road record shop 'Vinyl Solution' which back then was home to the UK's leading HC band, The Stupids.Nowadays its the location of the platinum-selling Visible Noise label.

By early 90's I'd become keen for the label to branch out a bit from the Grindcore/Death metal scene, Helmet's "Strap It On" album was a fave of mine at that time, so it seemed logical to snap up the buzzworthy locals Fudge Tunnel to the label.

The signing did cause some friction- from memory, it was Fudge Tunnel who were more antagonistic to Napalm Death than vice-versa - Alex, Dave and Adrian just weren't impressed with Repulsion or chuffed with Napalm Death's music. In truth they were typical Indie-Rockers, influenced by bands which were deemed cool by their peers- Big Black, Helmet and Nirvana.Its fair to say, Fudge Tunnel pretty much looked down on the underground extreme metal scene which Earache was spearheading, and for some of those bands in that scene, the hostility was mutual.

Fudge Tunnel were the ones who insisted that Earache give them a different label identity so they weren't lumped in with the DM bands. It was a sensible request, given the narrow minded tastes of most grind/Death Metallers,and come to think of it, most Indie-Rockers are equally as narrow-minded, so Earache changed its own logo into a slicker 50s era style to appease them.

The irony of course is that Alex Newport's first proper European tour for Fudge Tunnel was with Brazilian metallers Sepultura, this was where he met and ended up marrying one of Gloria Cavalera's daughters. Being part of the Cavalera family spurred his relocation to the USA and being part of the successful Nailbomb project for Roadrunner.It was undoubtedly a metal band, but I assume the more punky aspects of the group was mostly Alex's input.

Alex nowadays is a successful producer- his claim to fame is the recording of System Of A Down's first demo which led to their signing to Rick Rubin's American Recordings.
Posted by Digby at 11:02 PM

Gloria Cavalera, the wife of Max?
How old is she if in the 90's already had an old enough doughter to be married?

Well, by the look of her - older than dirt. Apparently she owes Jesus a fiver.

slyeah im one of those peer infested indie grunge scenesters sitting up in the hills outside of melbourne. i grew up on metal and ended up bored shitless with the constant barrage of absolute shit on that label. fudge tunnel was your only saving grace. still are

I have to agree, Fudge Tunnel was it for me as well, as far as Earache goes. They were intelligent. Perhaps too intelligent. When they ended up thrown into Earache's deal with Columbia, they had all the responsibilities of being on a Major label, without the financial support.
Alex said fuck it, I don't need this shit.