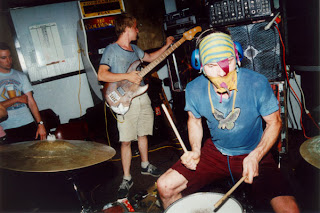 Question: do you think its possible the guitar is an over used instrument in rock music? by that i mean its now become the convention. do you see it as a possibility that band that use the bass as the main instrument eg lightning bolt, death from above 1979(when they were around), exit international and palehorse are actually reshaping rock music because they are using a different instrument as the lead or is it possible thease bands are being seen as gimmick bands. im curious as to your opinion on this its just 90 percent of bands seem to have the guitar/bass/drums line up and im wondering is there is room for going from that whilst still being taken seriously? From:


Answer: When it comes to bass-lines versus riffs, riffs win every time for me dude.But I agree it pretty cool to listen to bands with a different slant from time to time.This group of bands you mention, well I've never really seen them as connected or as being part of a common scene, just because they choose to have bass-guitar as lead instrument, but I take your point about how it breaks the convention of the traditional drums/bass/guitar/vocals set up.The reason the conventional set up is so successful is because it offers the full palette of sonic frequencies, in my opinion, it just "works".

From the 70's onwards,the dub and reggae scenes have had bass-lines taking the lead and some of the biggest post-punk rock bands at that time also built their songs around bass-lines - undoubtedly by taking major influence from the dub scene- the guitar was somehow relegated to the role of providing flourishes or fragments of noise instead of riffs. Bands like Talking Heads, Killing Joke spring to mind. Public Image Limited might well have been the first to spearhead this singleminded fixation on basslines, because at the time John Lydon often proclaimed Dub was his main influence, after Sex Pistols folded.

Nowadays of course the bands you mention have ditched the guitar all together.For me personally its an interesting diversion to listen to them for a while, so cheers for the cool question!


I remember London's Palehorse well, because we had a connection to their label. I saw them many times as they were constantly supporting every band in the UK between 2002-5 or so. With two bassists going at it, they were pretty heavy, but it was more a dirge than anything memorable. In 2003 they had an album out "Gee That Ain't Swell" on UK indie Dry Run Recordings which was the label run by Earache's former sales manager Raffi Ouzounian. Raffi was the biggest Godflesh fan around, and compiled their best-of set "In All Languages' for Earache. His label also released the first post-Godflesh material from Justin Broadrick, Jesu's 'Heartache'.

There is a really cool bass/drums duo from Estonia called Talbot that plays stoner/doom metal. The bassist goes through distortion and basically acts like a guitarist. I've heard other duos do this, but Talbot has grabbed my ear the most.

One of the best bass only/no guitars, for me, in the extreme metal/whatever scene is Seattle's Wormwood, two bass players, keyboards and vocals. No guitars at all.

you know theres a link between earache and lightning bolt, lightning bolt are influenced by and collaberated with the boredoms who are obviously related to naked city, they also are fans of bill laswell of painkiller fame.

and here's another insane drum display from lightning bolt
http://www.youtube.com/watch?v=NitBom0ah7Y

No mention of Man Is The Bastard? Awesome use of two bass guitars, and the most unique sounding of all the old powerviolence bands in my opinion

I definitely don't think the guitar is over used! It is the base of rock and roll! The more guitars the better! Rock on! http://www.georgejacobsmusic.info/

We roll like this as well, just one bass, drums, mouth noises. Started off as just a jamming thing, then though 'fuck it, we don't need guitar'. Works just fine for us.

Music is in the heart of every person even though your not a good musician or even a singer , people cannot live with out music. Music is a life, an art of every person. Music really inspired me in all aspects of my life give.

Rock, blues and jazz guitarist GW Williams is the worlds top,or greatest all around guitar player I've ever listen to.
I've seen other rock guitar player stylists who can't play rock jazz blues classical on both electric and acoustic guitar, like GW Williams.
My question is does anyone know if he's going on tour in the United Kingdom or London England soon in 2016 or 2017 ?