Akercocke:Intractable clip- where is it? 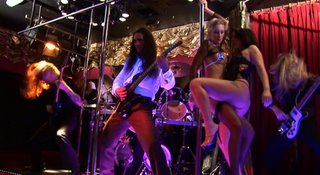 Question: WHERE IS THE INTRACTABLE VIDEO FOR AKERCOCKE??? From: awny_mcprawny@yahoo.co.uk


Answer: It was filmed and completed but the label and band decided to shelve it due to substandard production values.Its unlikely to see the light of day because it just looks horrible, sorry.
Anyone who knows Akercocke knows they have a red-blooded, eager admiration for the female form, so on the release of the last album "Words That Go Unspoken.." the band fancied a concept video this time- it was to be a softcore porn movie-esque type of affair, with no band members in it, just girls in various state of undress.Not a bad idea in principle, but Earache could'nt see the point in it, having done a similar tho much much more hardcore-porn type clip for December Wolves some years before. No Tv stations can ever play it and we had to be careful about the legalities of even streaming such material from our website because nudity is strictly for over 18's, and there are laws to abide by, so the idea faded away.

As an aside- Earache has shelved a few clips over the years because they are simply too substandard for showing, mostly cos of lame subject matter; The Haunted's 'Chasm' clip off their debut featured BMX riders wipeing out hard on concrete..Iron Monkey's clip is just ECW wrestlers..Massacres clip was too dark..Ultraviolence clip featured schoolkids headbanging to 'Paranoid', which looked shite.
Posted by Digby at 2:20 AM

Or you could just do what Peaceville did on their first concert video of My DyING BRIDE and release the shitty videos as a "feature" for punters idiot enough to actually pay for them. Haha.