System Of A Down on Earache? 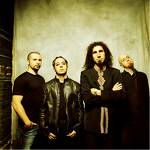 Question: Is it true that earache discovered System of a down, Hatebreed and Converge, as aparently their first big shows were supporting earache bands ( ok napalm death) did earache look into signing any of them after the event? From:

Answer: Yes this is partly true in the case of SOAD..Earache was the very first label to offer a record deal to System Of A Down..sounds unbeleivable now but its 100% true.Our good friend Dino of LA band Fear Factory dropped by the UK office with the demo of SOAD, produced by non other than ex-earache artist Alex Newport, and we loved what we heard, especially their political stance which was unheard of in the burgeoning LA nu-metal scene, they stood out in what was a mass of korn clone bands, or Sugar Ray type jokey acts, they had more intensity.

I immediately flew to LA to meet with the band and manager and the band were flattered that a UK label had taken a major interest in them, so we got close to signing offical contracts, but in the end the major labels began to make them offers nd they signed wit h Rick Rubin's American Recordings.Serge still to this day remembers that Earache was the first label to appreciate what they were about.
Posted by Digby at 12:33 AM