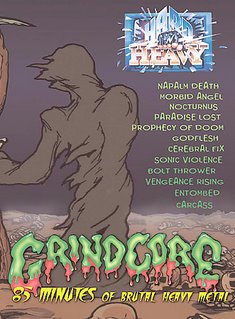 Question: Hi,
I have asked this question before but didnt recieve an answer, I am looking for the name of a VHS tape or maybe its been made a DVD now that had a bunch of Death Metal bands featured as a Death Metal band special, the first feature was on NAPALM DEATH and they had just released HARMONY CORRUPTION, There was a big special on the FLORIDA DEATH SCENE with interviews featuring Chuck from DEATH, CANCER, OBITUARY and also a Morrissound report as well. I can not find it anywhere and I think its because I am getting the name wrong. Can you help me out.?
Lee From: angry_mob2005@yahoo.com.au


Answer: yeah those bands were interviewed, along with me for a special episode of the early 90's metal documentary VHS series called'Hard n Heavy' - its now been repackaged by some enterprising fellows, renamed "Grindcore"with some truly awful artwork, and released on DVD on Universal.Earache has nothing to do with this by the way.BUT there is no florida scene report on this DVD- i think you might have to search for the actual hard n heavy original VHS, some of the original VHS are now released on DVD but mainly the ones featuring OZZy or Nirvana etc from that era.
Posted by Digby at 12:43 AM