Why No Metalcore on Earache? 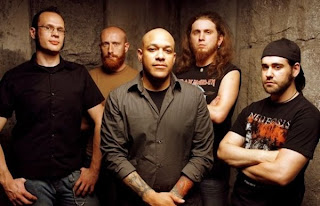 Question: Thanks for answering the question on darkest hour, from what i have heard this jorge was pretty on top when it came to the first wave of north eastern metalcore bands overcast, aftershock ( now of course shadows fall and killswitch engage), unearth, the red chord as well as himsa who although from seattle played many shows on the north east due to its over populance of bands, Is there any reason why earache decided to stay away from this scene? as history shows just a few years later the scene exploded and became the metal mainstream. From:

Answer: Thats a great question.. there is a whole slew of US metalcore bands who exploded and, as you say,those bands- Killswitch Engage, Shadows Fall- soon became hugely popular and in effect became the metal mainstream in 2002-3-4 right after the nu metal wave had subsided.
Earache dealt with none of those types of bands, in hindsight,from a commercial point of view especially, it was a massive failing of ours.
Short answer for why is- we didn't understand the scene.It was a genuine crossover of metal and hardcore, hence 'metalcore' BUT they appeared to us at the time, to be 'Hardcore Bands Trying to Play Metal'- and doing it badly, so it wasn't to our taste.They appeared 75% HC and 25% Metal to us.You could say we were snobby about our own past legacy of bands being 'better',this pickiness clouds our judgement of newbies quite a lot.
Earache isn't totally alien to HC though- the label has dabbled in HC bands in the past- releasing Coalesce's second EP, also we have Dillinger Escape Plan under license from their pre-Relapse label,Now or Never.But Metalcore itself passed us by, thats true.
So, we watched from the sidelines as labels like Ferret and to some extent Trustkill embraced the metal+hardcore= metalcore bands and those labels rightly dominated the scene, deservedly becoming huge in the process.Festivals like Ozzfest and Warped played a big part also, it was timely as the scene co-incided with the huge upturn in interest in rock.

From my viewpoint, Hatebreed were the daddies and inventors of Metalcore and I was a big fan of them, still am in fact, we'd sign them anytime, but would need a big cheque.

Red Chord were one band who we thought offered something extra and liked a lot- and they had a deal offer from Earache after the Robotic Empire debut, but the connections to the scene were well established elsewhere and so Metal Blade secured the bands signatures.
In effect we sat things out for a few years - waiting for Death metal + hardcore= Deathcore to come along and then released UK's BRING ME THE HORIZON's debut in USA and signed Chicago's OCEANO instead.
Posted by Digby at 11:30 PM