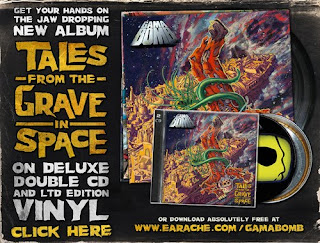 Question: I noticed @digearache's recent tweet about CD release of Gama Bomb's "Tales From The Grave In Space" ("Early signs are - fanbase doubled." Does this mean you might consider doing more free downloads in the future? (For the record, I downloaded the album and then bought a "real" copy on CD!) From: mooglebug@gmail.com


Answer: Short answer is- its too early to say with absolute confidence that the idea worked, but it looks like it did increase the bands fanbase, yeah. In November we gave away the complete album legally as a band-and-label-approved download.The files have been downloaded over 50,000 times so far from our file hosting partner Rapidshare, plus undoubtedly many more on the torrent sites.Its an impressive number, but for the time being, the success or otherwise of a band is still judged by the number of physical units sold (Soundscan & OCC chart) not number of files transferred (Big Champagne).The music industry is still hung up on physical sales data and charts, and to be taken seriously by agents and festival promotors, bands need to appear in those charts.


I'd like to thank you for being part of what is to us and the band a pretty interesting idea- I guess it worked out great for you, if you downloaded the files in November, got to spend time with the album, and then liked it enough to actually purchase the CD in January. Thank you! One thing I'm dying to know is- were you already a Gama Bomb fan from before, or was it the free d/l which convinced you to become a fan and spend money? Thats the question....

The reason it is too early to tell is the album has only been out 2 weeks, and the numbers I am quoting are ship out numbers to stores in UK & Europe which have indeed increased over the previous album 'Citizen Brain' by about 75%- almost doubled. But that alone doesnt mean they are selling through to fans, its only the amount dealers have taken- we'll find out for certain in probably 3-6 months. The USA edition is not yet out- its released on March 9th so we'll have more info about stateside action later too.

The uncertainty comes from the fact that traditional record retail chains (HMV, WOM, Best Buy etc) have the right to return any unsold stock to labels for full credit, called "returns", which is the bane of the old style music biz. The promotion of the free download has been great, with Industry mags like Billboard and Music Week covering the story. However, the actual numbers sold are never predictable until all the dealers who took the CD declare they want more copies, and so by implication let you know that they dont have any gathering dust on the shelves, for credit.

Another reason we don't know for sure, is because the band have yet to play a gig after the physical release. That's usually the first sign of progress, when bigger crowds turn up unexpectedly for a show. This has yet to happen.

It's nothing new to release an album on the internet for free. Unsigned bands have done it for years, I personally know a ton of cool up and coming, newish bands who have done it- trouble is, none have become household names in the scene. It needs something more than just "heres our files", anyone can do that. In my experience its more about how bands interact with their fans using social media nowadays- if you have something new and interesting to say, using twitter/Youtube/facebook, and the old warhorse, MySpace, a band can create a powerful and loyal fanbase in record time.Most of the breakthrough artists in the rock scene during the last 4 years have done exactly that, and the labels which saw this free social networking opportunity early, broke through along with them.

Don't get me wrong, we are happy there are signs of progess in raising the Gama Bomb's profile, but I am naturally cautious about declaring it a runaway success. It could be the simple effect of its a better album, or the natural momentum created by the bands 2 earlier albums. Time will tell.

As for doing it again, we probably will, if we find another one of our developing bands in agreement with the idea, yeah why not.
Posted by Digby at 11:10 PM

I downloaded the album then bought a copy. But I really liked Citizen Brain, so I would have bought the new one anyway since I'm a fan of the band. I like the idea of doing this, and must admit that I almost always download an album before I buy it, to make sure it's worth being in my CD collection.

We (THESYRE) gained a lot from putting our music online, available for free (our full discography!).

We multiplied by 20 our listeners (comparing sales with downloads) since uploading everything back in December 2009. Since we're not a live band and we own our recording studio sales hardly matters to us. All we want is our music to circulate out here: and it does now!

We'll press a few hundred copies to please people still into buying a hard copy but we'll keep the free/online thing going for sure from now on.

As for Gama Bomb, I never heard of them until I read that thing on the album available as a free download. It helped them gain a lot more exposure, I guess.

Great Blog. My band, Deathalizer, gave away debut Ep on Mininova.org and we got 66,000 downloads. This helped us increase our fan base in facebook and myspace tremendously. We have not been able to tour yet, so we don't know how it will affect our concert attendance, but we are looking to go out in May.
Our music is thrash similar to Gama Bomb.

Well, being an old school technology shunning fart, I refused to download the album or even acknowledge it's existence until it arrived on physical form. Sod all these new fangled MP3s I say! Physical's the future! :-)