Why no Death Metal in Norway- 'cept BLOOD RED THRONE? 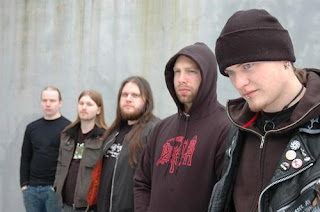 Question: Since you've signed one of the bands involved i have to ask you about this. Do you think there is a relitavly untapped group of quality old school death metal bands in norway? Earache obviously has Blood Red Throne but theres also now Obliteration ( who i have to mention have a great thrash side project) and also Ghoul Cult and a few others, im curious as to why you think the death metal scene up there is relitivly brushed under the carpet? when it was actually Blood Red Throne that had me searching for other DM bands from up there! From:


Answer: The short answer is Black Metal took over in Norway, it went from the imagination of Euronymous and a handful of bands, to the biggest, most controversial, most talked about style of underground metal in the world. Death metal by contrast became almost viewed as hackneyed and derivative, especially by Norwegian fans, who were quick to shun it, in favour of the more "evil" BM. This all happened between 1991-3. Even Darkthrone mutated from a quite basic Entombed clone outfit on Soulside Journey to within a year, playing early corpsepainted and spiked black metal on A Blaze in the Northern Sky.

Hey if you want to see how Euronymous plotted and planned the rise of BM, its worth checking out his collected interviews HERE. On a personal note, it was nice of Euronymous to give me hails in early interviews, but this soon descended into outright rivalry after he discovered there was more mileage in actually creating rifts between the big selling Death metal bands and his new breed of teenaged, corpsepainted,"evil" upstarts. Funnily enough I dont recall him ever slagging Morbid Angel, who were always just about evil and dark enough to appeal to the Black Metallers, it was mainly Napalm Death he hated.

Y'know, deep down all Black metal was, was Norwegian metal kids saying "fuck you, we can do better than you" to the Swedish musicians, most notably Entombed who had recently broken through the underground and were causing a sensation over the border. From my perspective back in the UK, it was simply that Norway wantd their slice of the action, written in their own folklore. A few years later it would be Finland which eclipsed them both, and who took the eventual top prize in the 'Scandinavian Metal-Eurovision' contest, with the highly produced slick gothic-rock of HIM and Nightwish selling huge amounts all over the world.

But back to Death Metal- you are right, its probably only BLood Red Throne who have singlehandedly kept the torch of true bludgeoning DM alive in Norway.BRT Mainman Tchort was also in Emperor and Green Carnation and Carpathian Forest, so you could say he's one of those musicians who is not hung up on any one scene.He is a world-class musician who chooses to play all styles of BM and DM, even proggy/stoner-rock. Tchort (pictured in middle of BRT line up) operates regardless of trend or fashion, which is an absolute rarity in the scene.

The only thing that made (Norwegian) Black Metal stand out was the fact that some of its musicians were ready to cross the line and start putting action behind their ideas, where most Death and Thrash bands only used the dark themes as mere imagery. This is in part why this scene got so much coverage (due or not) and exploded worldwide.

There are bands out there trying to up the ante again and I guess labels such as Earache are probably scanning the horizon to grab one of the next 'big band'. Deathcore will obviously vanish fast and I wonder what the next big sensation will be...

my money is on the swedish kids who are doing old school swedish death metal, and obliteration who are over the border in norway will be joining the swedish bands at the top of the pile. I also think that earache will be late to this party due to said scene currently being played down.
Oh also the new wave of d-beat and also the new holy terror hardcore bands being signed to deathwish inc. I actually see the kids kicking against this new wave of trad metal in the end, due to the fact that some of the bands seem quite poor and one dimensional compared to the originals ( my feelings with the new wave of thrash also). Theres also the possibility for more futuristic sounding etreme metal bands eg the locust, genghis tron as i see the retro thing running its course soon!